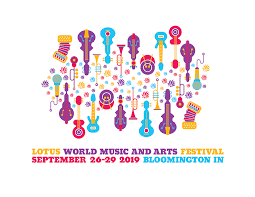 (BLOOMINGTON) – The 26th annual Lotus World Music & Arts Festival will once again fill the streets of Bloomington with sounds and sights from around the globe from September 26-29.

Established in 1994, the Lotus Festival is one of the oldest world music festivals in the United States and the only festival of its kind in the state of Indiana.

The festival is well known for debuting world-music artists in the U.S. and has become a must-play festival for the best international performers and creative talents.

The festival kicks off with a concert at the Buskirk-Chumley Theater on Thursday, September 26, at 7 p.m., featuring Çudamani, a full gamelan orchestra from Bali.

At the kickoff concert, a special short film by Jim Krause will be debuted, showcasing 25 years pf Lotus history and art.

Starting September 27, the festival revolves around evening showcases on Friday and Saturday nights, when attendees can sample dozens of varied sets each evening.

A complete schedule of performances is available online.

This year, for the first time in nearly 20 years, Lotus is offering a free outdoor performance, “Lotus in the Meadow”, along with campus partner the Indiana Memorial Union, on Thursday, September 26, at 9 p.m. in Dunn Meadow.

Lotus in the Meadow features Jordanian/Palestinian artists 47Soul. Other free events on Saturday, September 28, include the family favorite Lotus in the Park, Festival Unwind Yoga I, an interactive workshop with festival artists Frontera Bugalu, and a special nighttime street performance by IU’s
Marching Hundred Drumline.

They’re best known for creating a contemporary aesthetic all their own by re-wiring and up-cycling materials such as metal, cans, engine parts and plastic containers found in Kinshasa’s streets into vital sculptural resonant dance music.

Other free events on Saturday, September 28, include the family favorite Lotus in the Park, Festival Unwind Yoga I, an interactive workshop with festival artists Frontera Bugalu, and a special nighttime street performance by IU’s Marching Hundred Drumline.

More free events on Sunday, September 29 include Festival Unwind Yoga II and a songwriting workshop with Sofia Viola with Dat Garcia. The festival ends with the Sunday Closing Concert where the purchase of a Festival pin is the admission price.

Following a large 25th anniversary celebration in 2018, this year’s festival will unfold under the leadership of new Lotus Executive Director Tamara Loewenthal, who was appointed in June.

Although new to the executive director role, Loewenthal has more than 20 years of experience with the Lotus organization and festival in various capacities, and she says this year’s lineup offers an excellent mix of old favorites and new discoveries.

“The Lotus Festival has been close to my heart for a long time,” said Loewenthal, “and I could not be more pleased to have a leadership role in bringing the 26th festival alive in Bloomington. Lotus ‘regulars’ are going to be thrilled by the return of groups such as Movits!, Väsen, and Le Vent du Nord, but we’re also bringing wonderful new surprises such as Çudamani, Frontera Bugalú, and the Congolese street band KOKOKO! It’s a dynamic lineup, all around.”

A complete list of artists is available at lotusfest.org.

All-inclusive, weekend, and single-day passes are available online, by phone, and in-person purchases via the BCT Box Office.

The Lotus World Music & Arts Festival is made possible by the generous support of community partners, businesses, and granting agencies, including presenting sponsors Indiana University and the IU Bloomington Office of the Provost and Executive Vice President.

A complete list of sponsors can be found here.

The Lotus Education & Arts Foundation is a non-profit 501(c)(3) organization based in Bloomington, Indiana, with a mission to create opportunities to experience, celebrate, and explore the diversity of the world’s cultures, through music and the arts. For more information, visit www.lotusfest.org/ or call 812-336-6599.