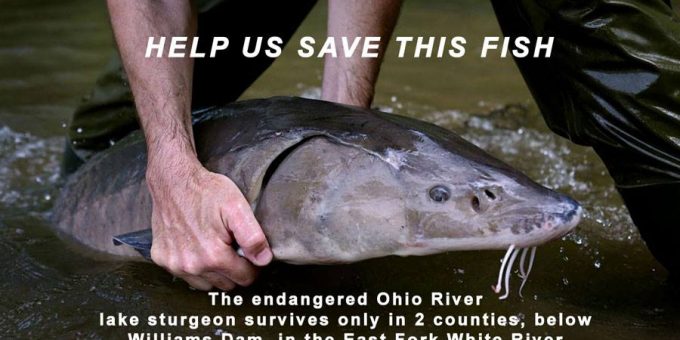 Today, lake sturgeon, which first evolved in the early Jurassic era, and can grow to more than 7 feet in length and more than 300 pounds, survive only in about 50 miles of the East Fork White River in southern Indiana.

Since 1912 their spawning migrations have been blocked by Williams Dam, a former hydropower facility where generation ceased in 1958, with ownership deeded to the State of Indiana afterward. Its only use for the past 60 years has been a platform for small numbers of fishermen.

At the beginning of 2014 FISH began fighting a scheme to restore power generation at Williams Dam. That battle was won last Fall when the hydropower license was surrendered.

FISH also coordinated with the Center for Biological Diversity and other environmental groups, and in May of last year jointly petitioned for protections for Indiana’s lake sturgeon, and legal proceedings began to declare them (and other lake sturgeon nationwide) as endangered, and thus protected, under the Endangered Species Act. The U.S. Fish and Wildlife Service recently agreed, in general, with the petition, but FISH is keeping a close eye on that process.

As the culmination of these efforts, and in order to ensure that Indiana’s lake sturgeon not only survive the looming threat of climate change – among other possible catastrophes – but also thrive to the extent that they can be restored to much of their historic range, FISH is proposing the following:

1. Removal of Williams Dam. This will restore and connect much of the East Fork’s ecology and habitat, and allow the lake sturgeon to migrate upstream to spawn as they did prior to construction of the dam. Other threatened and endangered species will also benefit. This was the Indiana Department of Natural Resource’s plan in 2004, as stated in a letter to Senator Lugar, along with the assurance that provisions could be made to ensure the City of Bedford’s water supply.

2. Provide recreational facilities at and access to the East Fork White River for paddlers and fishermen, and boost the local economy with tourism and recreation. Many communities across the USA have removed dangerous low-head “deadbeat dams” in order to restore rivers and repurpose them for wildlife and recreation. The shining example in the Midwest is Dayton’s RiverScape River Run and associated Metropark facilities, both urban and rural. Their brilliant solutions provide their community, and visitors, with not only enhanced natural settings, but also whitewater kayaking. While surfing on the East Fork may not be likely, it’s time to study the possibilities for adding to what is already a wonderful array of recreation and tourism opportunities in Lawrence County and the vicinity.

FISH will work with its environmental allies as well as local, state, and federal officials to find win-win solutions for both Indiana’s lake sturgeon, and the Hoosiers who live near them.

FISH invites Hoosiers, Ohio River basin neighbors, and fans of rivers, fish, and nature worldwide to join in celebrating World Rivers Day, and to learn about FISH’s plan and how to support it by visiting FISH’s website or pages on Facebook and Twitter. And please use and look for the hashtag #INlakesturgeon on social media.