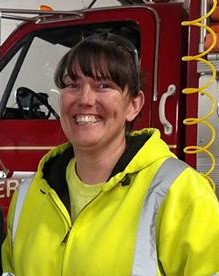 “I am excited about the opportunity to work with such a great group of men and women on our department and the fire department board,” said Voorhies.

The annual meeting of the fire department was held Saturday at 7 p.m. at the fire station in Springville.

With the appointment of Voorhies as fire chief, there is now a new vacancy of the board that will need to be filled.

“It is very exciting to be chosen to be the fire chief. I want to thank the fire board for believing in me to lead the department,” said Voorhies “I want to try to recruit new members for our department.”

Voorhies will also start using social media to keep the public informed and to share the needs of the department.

The small rural department in Lawrence County made a record number of runs (213) this year. Many of those runs were mutual aid calls assisting Marshall Township Fire Department.

Volunteer fire departments over the last several years have seen a decline in volunteers due to the long hours of training and an increase in demands of emergency services.

The Perry Township Fire Department have long accepted women into the ranks. Others who have served are Keely Grogan, Tammy Martindale, and Rebecca Phillips.