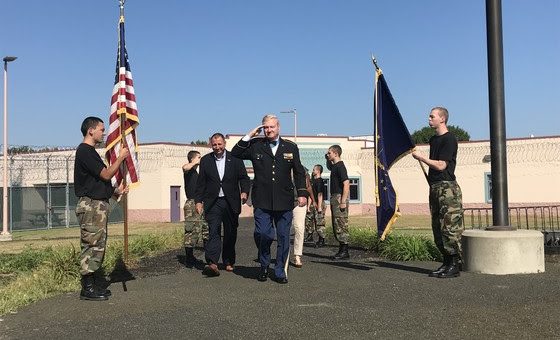 On November 19, 1968, Sgt. Davis received the Medal of Honor from President Lyndon Johnson for “conspicuous gallantry and intrepidity in action at the risk of his life above and beyond the call of duty.” Sgt. Davis was recognized for his actions during the Vietnam War which included crossing a river to save his wounded comrades despite being wounded and unable to swim himself. Sgt. Davis is often referred to as the “real” Forrest Gump after a video of him receiving the Medal of Honor was re-purposed for use in the popular movie Forrest Gump.

After being presented the Medal of Honor at the White House ceremony, Sgt. Davis played “Oh Shenandoah” on his harmonica in memory of the men who served in Vietnam. Today, Sgt. Davis again played this song to the Pendleton Juvenile Boot Camp cadets allowing an opportunity for all of the cadets to ask questions regarding his honorable life experiences.

Warden Sutton states “It was an honor to have Sgt. Davis visit our facility today. He captivated our youth with the stories he shared and provided them great lessons on not only history but of those who serve our county”.