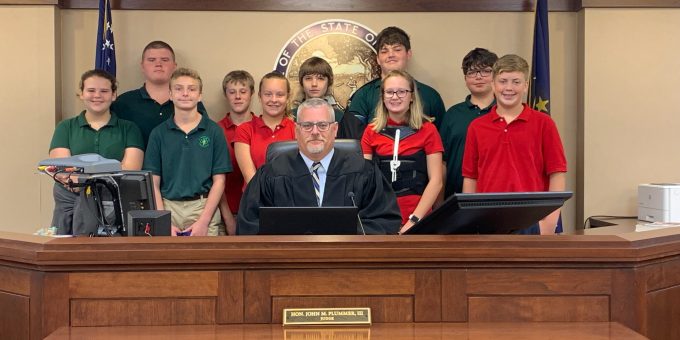 (BEDFORD) – Lawrence County Superior Court I Judge John Plummer III spoke to eighth-grade students from St. Vincent de Paul today about the United States Constitution and how it is applied in court daily.

Today marks the 232nd birthday of the United States Constitution.

In 2004, Congress passed legislation establishing Constitution and Citizenship Day, a federal holiday commemorating the ratification of the US Constitution on Sept. 17, 1787.

Background on the U.S. Constitution

On Sept. 17, 1787, 39 of the 55 delegates attending the Constitutional Convention signed the U.S. Constitution, forging a new government for the United States of America.

The result of months of strenuous debate over the structure and powers of a new federal government, the U.S. Constitution is a testament to cooperative statesmanship and the art of politics. In fact, in his proclamation creating the first national Thanksgiving Day on Thursday, Nov. 26, 1789, George Washington noted that the holiday should be a time for the people of the United States to give thanks, among other things, for “the peaceable and rational manner” in which the Constitution had been established.

Since the Bill of Rights was adopted on Dec. 15, 1791, the U.S. Constitution has been amended only 16 times. Providing an intricate system of checks and balances among the various branches and levels of government, and assuring the basic individual liberties that are essential to a free and democratic society, this remarkable document has proved extraordinarily adaptable to the needs of a changing society. It also has served as an inspiration and a model for other countries around the world.