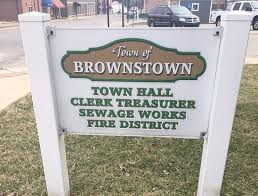 (BROWNSTOWN) – Renovation on Brownstown Town Hall and the Police Department will not begin until December because of a commitment conflict with a subcontractor.

The Seymour Tribune reported last month, and town officials voiced concerns that no work had been done on the building at 116 E. Cross Street. The town awarded the project in May to Goecker Construction of Seymour.

Goecker Construction had the lowest of three bids at $381,256.

Town attorney Travis Thompson said a final draft of the contract officially had not been signed because Goecker was concerned with a penalty clause if the project was not done in a timely manner.

Goecker said a number of issues could hold up a project past the 120-day completion time frame, including weather and waiting on approval for change orders.

The board agreed not to add the penalty clause to the contract as long as Goecker Construction provides updates on the work bimonthly.

One of the main reasons for the town purchasing the former Jackson County Banner building is the current town hall facility at 200 W. Walnut St., built in 1945, is not compliant with the Americans with Disability Act.

The police department will have space for eight cubicles and separate offices for the chief, assistant chief, school resource officer, and detective. There also will be an interview room, a mechanical room, and men’s and women’s locker rooms with restrooms.

In the back of the building will be two garage bays and an evidence room.