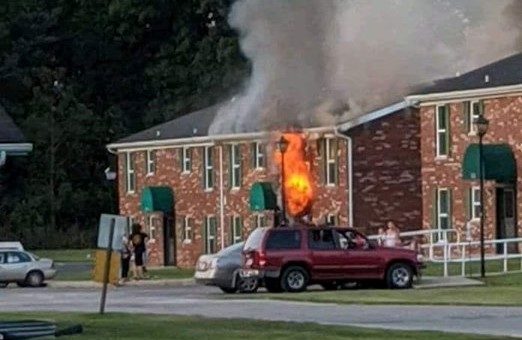 (MITCHELL) – Firefighters from several departments are battling a blaze a Persimmon Park Apartments this evening.

Responding to the blaze was Mitchell, Marion Township, Huron, and Orleans Fire Departments.

Firefighters are asking the public to stay away from the area and allow them to perform the duties of their job.

The fire started around 7:45 p.m. and firefighters rushed to the scene after receiving a report of someone trapped inside. Jennifer Jackson, Gary Mundy and their 2-year-child lived on the floor above the burning apartment. The family escaped before firefighters arrived. Mundy was treated for smoke inhalation at the scene.

There are no injuries reported and no individuals have been transported to local hospitals at this time.

Two AMR ambulances were on scene along with Mitchell Police officers.

Officials say that one pet died in the blaze.

Firefighters will be on the scene for several more hours trying to extinguish hot spots.

There is no word on what started the blaze.

Lauren Honeycutt lives in the building where the fire started but was not home when the fire ignited. Neighbors reported seeing flames shooting out of the lower level of the building.

The Red Cross is on the scene to assist residents displaced by the fire. There is no official word on how many were displaced.