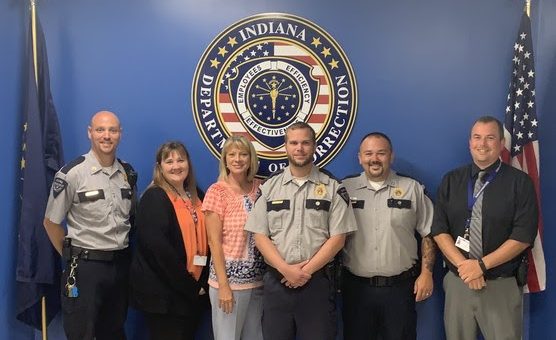 (PENDLETON) – The Correctional Industrial Facility (CIF) is proud to announce the promotion of Garry Jones to the rank of lieutenant.

Garry Jones began his career in the Department in September of 2011 at Westville Correctional Facility (WCC) as an Aramark employee. Jones was employed two years in this position before transitioning into the position of Correctional Officer in 2013.

While working at WCC, Jones was assigned to various areas of that facility, gaining a solid working knowledge of the operations within a correctional setting before transferring and bringing those skills to the Correctional Industrial Facility in 2014. Those job skills as well as a solid work ethic resulted in Jones’ promotion to sergeant a short time after his arrival at CIF.

Jones has worked many different areas as a sergeant, some of the more notable posts being our Disciplinary and Administrative housing unit and as our yard sergeant.  Lt. Jones also previously held the title of Field Commander for the facility’s Emergency Squad. Lt. Jones has passionately dedicated many hours into staff development ensuring that new staff and veteran staff alike have the necessary tools to be successful correctional professionals at CIF.

Warden Wendy Knight commented, “Lt. Jones commitment to the Department and to developing staff is commendable, he will be a huge asset in moving the facility and department forward.”

The Indiana Department of Correction is currently seeking qualified candidates to join their team. To jump-start your career in corrections visit WorkForIndiana.IN.gov and apply for a correctional officer or correctional caseworker position today!