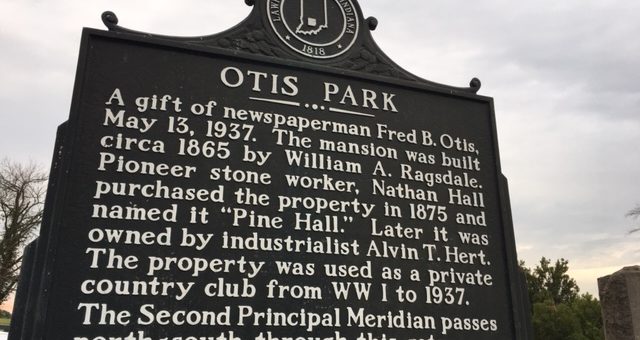 (BEDFORD) – Otis Park Golf Course is a historic park, golf course, and national historic district. The park was established originally in 1923 and donated to the City of Bedford in 1935. It was initially developed as a Works Progress Administration project between 1937 and 1941.

The bandshell was constructed around 1939, a rock garden, bathhouse, clubhouse, four picnic shelters, shelter house and gazebo were added around 1938.

Bedford’s first golf course, The Town & Country Club was built in 1914 on the White River about two miles below Palestine. The property later became a YMCA Camp and was then owned by the Bedford Christian Church. Some of the early golfers and owners of the Golf Course were R.C. Cosner, A.H. Auerbach, C.K. Austin, G.W. Muir, H.T. Easton, Louis Roberts, R.I. Beddoe,  Ed Sohn, E.G. Beringer, T.C. Underwood, J.J. Quinn, and John Walls.

The second golf course was built on the south end of Bedford in 1916 along 24th Street between I Street and the Monon Railroad. It was called the “Bedford Country Club” and was built by Ralph Reed, A.E. Dickinson, Art Michi, M.F. McGrath, Clarence Link, and W.R. Martin.

Public interest picked up with the advent of the Bedford Country Club and later with the addition of the Hillcrest Golf Course, just north of  River Bluff Road. Some top and inveterate golfers of the knicker era were: Dick Farwell, Everett Leonard (both professionals), Fred Wampler and Tom Barton.

In June of 1921 Tobe Hert, owner of  Pine Hall Dairy Farm in East Bedford, died in Washington D.C. In the settlement of his estate, the 149-acre dairy farm was sold. Hert had developed a process for creosoting railroad ties and posts, and had become quite wealthy.

Some members and owners of the former Town and Country Golf Club purchased the farm, and in April 1923 a new Bedford Country Club was formed.

That spring, a nine-hole golf course of 3,140 yards was laid out by Harry S. Scoop of Indianapolis and completed in September. The old Ragsdale Mansion was renovated to make it suitable for the club use. At the time there were 37 large, stately pine trees which formed an avenue in front of the mansion, and for years the grove was a popular picnic spot.

Everett Leonard of French Lick was hired as the first Golf Pro.

Also, in 1928, a 40-foot-by-80-foot swimming pool was constructed, and Leatherwood Creek water was used to fill it. The big brick clubhouse was used partially for dressing rooms. That arrangement proved inadequate, and the Club built a $1,700 locker house on the south side of the pool.

There were 180 family members, and applicants were so numerous officials had to restrict membership.

The men who served as Club President during those years were: M.J. Morgan, Robert O. Martin, Clifford Spear, and Henry Easton.

In 1932 there was a serious rift among members when the directors fired Golf Pro Everett Leonard who had served in the position for more than nine years and hired Bob Pebbles from Louisville. This created a hassle among members, and the board resigned en masse.

Several influential members quit and a downturn in the economy caused the financial situation to deteriorate fast.

In the summer of 1933, the golf course was opened to the public on a daily fee basis, and in 1934 the Bedford Country Club went bankrupt.

Pine Hall Dairy had been purchased for $28,125, the clubhouse remodeling cost more than $5,000, the golf course $10,000, the swimming pool $7,000 and other improvements cost $3,000. The debt was no problem in prosperous years, but in 1933 and 1934 it was impossible to recover.  The banks attempted to operate the club with family memberships at $25 per year but failed. In October 1934 it was sold at a Sheriff’s Sale to Citizen’s National Bank.

Bedford Park Board Members Will Ingalls and Leon Newland promoted Municipal Ownership, and the American Legion Post agreed to help the City take it over but the city could not handle the debt. In March of 1935, 100 members were secured assuring one more season.

On October 31, 1935 newspaper publisher Fred B. Otis announced he had purchased the Bedford Country Club, which he called “Pine Hall Property,” and would donate it to the City of Bedford for park purposes should the Board of Public Works and City Council agree to some stipulations.

Those stipulations included that the city would maintain the brick mansion as a museum,  preserve the pine grove, erect a Band Shell seating at least 40 musicians, build a baseball park for 1,000 spectators, provide lawn tennis courts, protect animal life and never permit the sale of intoxicating beverages, and name the property “Otis Park”.

It is said that “Dot” Murray, Bedford Mayor at the time,  greatly influenced Mr. Otis’s decision to donate the property to the city.

The City of Bedford took immediate control and opened Otis Park Country Club to the public under the supervision of the park board, and the first Otis Park Committee was formed with Arch Carter as chairman. That group set fees at $15 per year. Lester C. Smith was hired as Golf Pro, Fred Wampler was hired as Park Manager and John Flynn as Greenskeeper.

Mayor Murray began the long process of seeking federal funds to rebuild and improve Otis Park. In 1936 Arch Voris, head of the golf committee reported a small profit with an income of $2,645.

Beginning in 1937, grants from the WPA (Works Progress Administration) literally poured into the City of Bedford for improvements at Otis Park. That year, an 18-hole, par 60, 5,694-yard course was completed. The sport of golf began to become popular, and a number of boys earned money as caddies.  Chester Werner and Carlo Catozzi were caddy masters. A caddy for 18 holes was paid 60 cents.

Otis Park’s official opening day was June 27, 1937, with a Pro-Am golf tournament. A concert was held in the bandshell before a crowd of 2,500 people.

In November of that year, the upper shelter house was completed as well as a new clubhouse near the hole 1 tee. Some 10,000 feet of ornamental rock walls were built. Also, stone bridges and 9,000 feet of water lines were laid. Three miles of roads, picnic, and parking areas were completed. And most importantly, three and one-half tons of grass seed was planted.

Avid golfer Tom Barton, Bedford City Champ in 1935, died while playing the French Lick Springs Course in October 1937. His gravesite in Green Hill Cemetery is marked with a full-size carved stone sculpture of him and his golf bag.

In 1938 the first Ladies Invitational attracted 47 players while the Bedford-Times Mail Meet had 135 entries.

One of Indiana’s best golfers, Frank Champ of Indianapolis, became Otis Park pro in 1939. That year he advanced to the PGA finals at Ponomok CC, Long Island, N.Y. Champ and also played in the PGA finals at Hershey, PA, and was eliminated by Ben Hogan. For several years Champ’s low round of 65 held the Otis Park record. Champ left Otis Park when the Park Board wanted to reduce his $75 a month salary. The city also furnished his living quarters in the brick mansion along with utilities.

By 1941 Otis Park was almost complete and was attracting statewide attention. The cost was estimated at $1.5 million. The City Park Board retained the control of Otis Park and local citizens enjoyed the fine facilities that could have never have been accomplished under private ownership. Otis Park has always attracted a large number of golfers each season due to the outstanding design and above-average upkeep.

A new course record of 61 was recorded by Gordon Jefferies in 1959 while playing in the Bedford Elks Calcutta, which was then an annual event. Jefferies was a talented local player who later became a member of the PGA.

Around 1953 Golf Pro Matthews purchased the first powered golf carts which were three-wheelers. Several years later the Park Board instituted municipal cart ownership, and paved cart paths were laid in 1992 and completed in 1997.

The Bedford Recreation Foundation was organized in 1979 and assisted in raising $40,000 to purchase 17 acres adjoining Otis Park to the east. This land was used to construct new holes 14, and 15. Old hole 9 and 17 were closed to make land available for the driving range which opened in 1980.

Additionally, the Claude Atkins Celebrity Golf Tournament was established in 1992 and continues to attract teams of local and nationally known golfers each year.

Otis Park Golf Course is funded in part by a trust fund established by Mr. Otis in the 1930s. However, the course income has been adequate to cover expenses and generate a surplus to be used for other Park Department projects.

In 2019, more than 27,000 golfers play annually at Otis Park with more than 146 acres for families to play golf, rent the Red Brick, shelter house, or have a picnic or cookout at the many places in the park.

Today many municipal golf courses are facing financial instability, whereas Otis Park continues to generate revenue – making it a gem of golf courses throughout the State of Indiana.