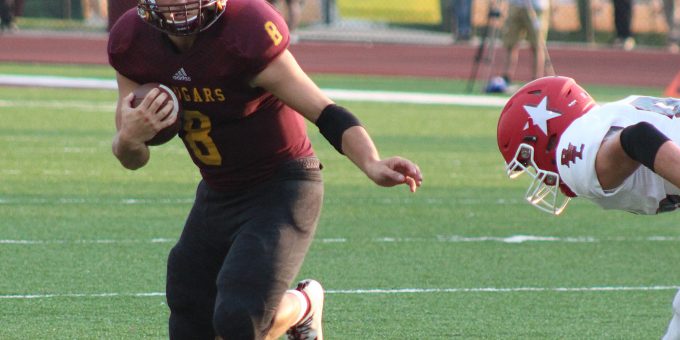 Bloomington North shape-shifting running back Xavier Trueblood slashed the Stars for four touchdowns as the Cougars crushed the Stars 41-7, with the entire second half played with a running clock – courtesy of the new IHSAA “mercy rule” and BNL’s inability to compete.

Trueblood, shifty with his cutbacks and blurring with his open-field speed, exploded for 160 yards rushing (only 8 carries) and three electric, break-away runs early in the first half. He added a touchdown catch as sophomore quarterback Reece Lozano fired for a pair of scores.

For the second consecutive week, BNL’s offense was lifeless, limited to a late score. For the second straight game, special teams gave up a touchdown. And for the second time this season, the Stars were sliced and shredded by an imaginative, high-speed attack with superior athletes.

North scored 28 second-quarter points for a 41-0 halftime lead, which flicked the switch on the mercy rule as the clock was never flicked off. Times flies when you’re not having much fun.

“Really tough,” BNL coach Steve Weber said. “We have a lot of question marks, still. We didn’t come out with any answers again. Go back to work, that’s all you can do. Show up Monday and work.”

BNL had moments to make an impact. After forcing a punt on North’s first possession, the Stars marched to the red zone, then retreated. After North scored twice, Ben Cosner appeared to recover a fumbled punt but was ruled out of bounds as he made the recovery. Would it have made a difference? Unlikely. From that point, the Cougars clawed away and did considerable damage.

Trueblood was the catalyst. He broke runs of 48, 37 and 29 yards for the first three TDs, cutting back against the defensive flow and finding the back door ajar. When Colin Weger returned a punt 60 yards for a 28-0 lead with 9:23 left in the first half, the blood was gushing and no tourniquet was available.

North added more as Lozano connected with Trueblood for a 33-yard scoring strike, and Lozano tacked on the final TD with a 23-yard connection to tight end Aaron Steinfeldt.

Cue the band, turn on the clock, game over.

BNL did piece together a 72-yard, 17-play drive that consumed the entire third quarter and the first two plays of the fourth, with Dalton Nikirk finding James Underwood for a 10-yard scored on fourth down. Comebacks are almost impossible with the new rule.

Trueblood was deadly, averaging 20 yards per touch. And he was barely touched on most of those. Lozano was 10 of 14 for 121 yards and top target Bailen Murphy grabbed 4 passes for 61 yards.

“Our passing set up our run really well. That’s a nice feel for our offense. You have to defend six guys and that makes it easy to keep a team off balance.”

BNL (0-2) has to find some sort of balance. Skyler Bates was limited to 32 yards rushing on 17 carries, and the Stars managed only 99 yards on the ground (the bulk on the second-half possession).

“We’ve got a lot of older guys that have to make a decision,” Weber said. “The effort level has to increase, and on the field playing ball. Too much wanting to be a spectator.

“I believe this team can do it. I just don’t know when it’s going to happen. I don’t know what button to punch to get it to come out. There’s only two ways to go here. You see a team give up and crumble, in Week 2, or they’ll bounce back and fight. I hope I know it’s the team that bounces.”