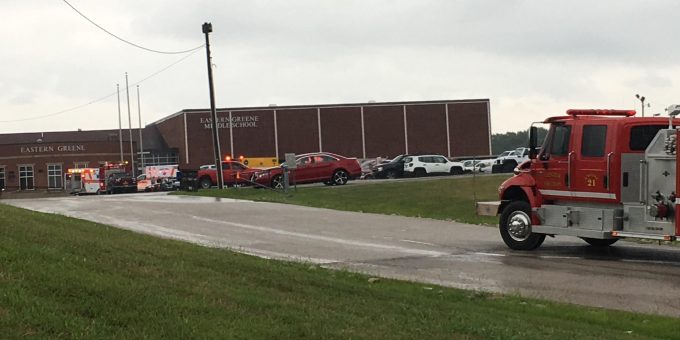 (BLOOMFIELD) – Additional testing will be performed at Eastern Greene Middle School to ensure the facility is safe before students and staff can return.

The hazardous materials investigation incident continues. As of yet, the Greene County Health Department, the State Fire Marshall’s Office and the Indiana Department of Environmental Management have not determined the cause of this incident.

Tests are being performed. According to Emergency Management Director, Roger Axe officials will keep the public updated.

“Because this is of the utmost importance, the school has been closed for today and remains closed until further notice,” says Axe. “Since authorities are not sure of the cause of this incident, we are telling all persons not to come to the school. The school will remain closed until it is determined the school is safe.”

Parents, students, and staff are to stay away from the school until further notice.

Officials are looking into a possible air quality issue at the middle and elementary schools.

According to a post on Eastern Greens School Facebook page, tests are currently being run by proper authorities.

Officials are taking every step to keep students safe. They will keep the public informed when information becomes available.

According to a press release from Center-Jackson Fire Territory, some people have been transported to area hospitals for observation.

There are no major injuries at this time. All patients had complaints of minor upper airway irritation.  To the department’s knowledge, everyone has been released from the hospital.

The State Fire Marshall’s office is on scene investigating, along with local fire departments. There is no gas leak in the school.

As we have more information available the public will be updated.

Units responded after a report of a hazardous material incident.

All students and staff were evacuated from the building.