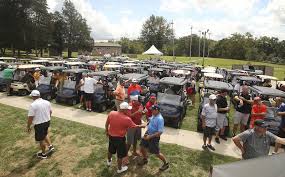 According to organizer Joe Elliott, as of Thursday morning, there were a total of 106, six-person teams for a total of 636 golfers signed up to participate in the two-day event.

The Claude Akins Memorial Golf Classic tournament is held annually in the memory of Claude Akins in Bedford. The funds received from the event go towards the Bedford Recreation Foundation and Akins Scholarships to the graduate students of Bedford North High School. The funds are also utilized for various projects that include recreation and developments.

Claude Akins was an American actor and was raised in Bedford. He was born on 25 May 1926 and died due to cancer at the age of 67 on January 27, 1994. His parents were Ernest Marion Akins and Anna Maude Akins. His father was a policeman by profession and mother was a simple housewife. His father was actually a stonecutter before he was in the police.

He spent his life as an actor for a long time on television, stage and film industry. Akins is mostly recognized for his role in the  TV series titled B. J. and the Bear as Sheriff Lobo, and later in a spin-off series entitled The Misadventures of Sheriff Lobo. He is also remembered for his role in a TV series Movin’ On by NBC.

“The 2018 Tournament was a big success with more than $40,000 raised,” says Joe Elliot, who helps organize the event. “Not only does the Bedford Recreation Foundation strive to provide a first-class golf tournament for everyone’s enjoyment but most importantly the funds raised by this event are at work helping to enhance the quality of life in our community. Your generous support of this tournament will allow this organization the opportunity to continue our mission of contributing to important and worthwhile projects that not only we can enjoy but, future generations can benefit from.”

There will be a team, an individual hole, hole-in-one, and weekend grand prizes and a Weekend Par 3 Shoot-out and putting contest.

None of this can be done without sponsors and community support.

For questions regarding sponsorship or the Golf Classic contact Tom Elliott or Joe S. Elliott at 812-275-3363.