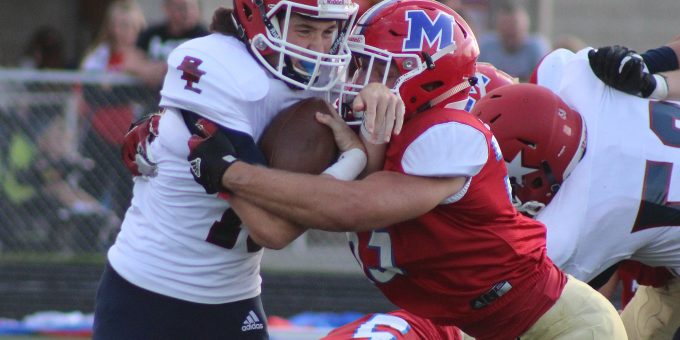 (MARTINSVILLE) – Quick strikes, aerial bombs, deflating touchdowns, turnovers. Everything that could go wrong – and the margin for error was already razor thin – went askew for Bedford North Lawrence in the season opener.

On the road, against an ultra-aggressive offense and swarming defense, those mistakes were compounded and often magnified into touchdowns as Martinsville blasted the Stars 40-7, grinding them into more pellets for the Siderewicz Field turf on Friday night.

That final is deceiving. The bulk of the second half was played under the new “mercy rule” governing high school football. Once the margin reaches 35 points, the clock runs continually. BNL didn’t, and wouldn’t, beg for mercy, but in reality there was no coming back from the wounds it suffered.

“We just can’t make mistakes, not against a team like that,” BNL coach Steve Weber said. “When we played things correctly, we did OK. It’s when you do things wrong. You just can’t make those mistakes.”

Mistakes were brutally obvious – allowing a fourth-down bomb for the first touchdown, fumbling the next series, falling down to allow another score, missing tackles, the special-teams breakdown. The Artesians are good enough without any gift shortcuts to success.

Tunitis started the avalanche of touchdowns with a 31-yard connection to rangy wideout Andy Myers, when got free behind the secondary. After the first BNL fumble, the Artesians went 42 yards for a 14-0 lead, capping the only real ‘drive’ with a 9-yard reverse by Matthew LaFary.

Next came the back-breakers. Tunitis to Craig Wesner for 68 yards, setting up a Cox 7-yard jaunt untouched up the middle. Tunitis to Myers for 68 yards, another TD. And then Cox, with Martinsville in run-out-the-half mode, twisted away for 77 yards and a 34-0 lead.

When BNL’s first series of the second half ended with a sack-fumble, losing 16 yards, and the ensuing blocked punt, recovered by Martinsville’s Jacob Burkett for the final touchdown, the clock operator flicked the switch and sat back to relax. Nobody was pleased by that, not even Martinsville coach Carter Whitson. He wasn’t looking to embarrass BNL, but it’s difficult to accomplish anything for anybody when the second half flies by like a runaway train.

“The new rule is the worst thing to ever happen in Indiana high school football,” he hissed. “It kills a kid’s ability to play.”

Tunitis finished with 196 passing yards, while Cox totaled 148 on the ground.

BNL’s feared triple-option attack was not that potent. New quarterback Dalton Nikirk was 8 of 12 for 65 yards with two interceptions. Running back Skyler Bates was limited to 36 yards.

The only bright spot was Dylan Nikirk’s 50-yard kickoff return to set up BNL’s only score, a Tabin Stillions 2-yard dash on fourth down, and a late interception by Owen Beaver.

“We have to move the ball, get drives,” Weber said. “I love watch them play defense. They’re all over you and swarming to the ball.”

Martinsville might have a special unit. The Artesians shut down Columbus East in the preseason scrimmage, a catapult effect for this performance.

“Bedford runs that offense that’s so unique,” Whitson said. “I think they got mad at me for calling it jinky. It’s awesome. We can’t do it. I wish we could. We knew we had a tough team coming in here, but they didn’t play well tonight.”

Martinsville (1-0) will now turn its attention to Bloomington South, while BNL (0-1) will have to regroup for another road test next week at Bloomington North.

“No one wants to lose, especially that way,” Weber said. “But we’ll get better for Week 10. We have to be patient, this will take time. We have to find the pieces and get them in the right spots.

“We can improve. We have to take this and use it. As crazy as it sounds, I saw improvement. We did some good things. I know this. We’ll keep working. And they will either respond or quit. We’ll find the right people. It might be a freshman or sophomore.”