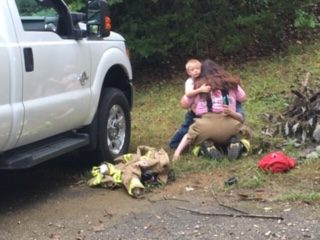 Firefighters responded at 10:20 a.m. to a home in the 2700 block of Tunnelton Road. The home is owned by Jack and Rory Case.

“We believe the fire started in the upstairs bedroom from a lamp that was too close to combustible material,” he added. “The fire has been ruled accidental.”

Nineteen firefighters from the four fire departments battled the blaze. AMR Ambulance Service along with the Lawrence County Police Department assisted at the scene.

The fire occurred on a narrow spot of roadway on Tunnelton Road and northbound traffic had to be rerouted around the blaze while firefighters battled the blaze.