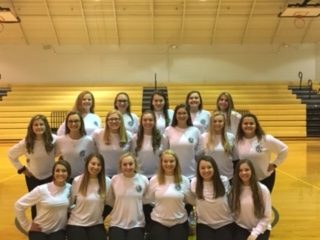 (MITCHELL) – The Mitchell High School Dance Team will be headed to National Competitions in Orlando, Florida on March 6, 2020.

Michelle Zehr has been the manager of the team for the past several years . She led the team not only to state championships in 2016 but they will now compete at the national level in a three-day event with more than 30 other teams from across the country.

All three have been on the dance team for more than five years.

After earning the recognition, all three girls can now compete in the Orlando Citrus Bowl, or the Disney Thanksgiving Parade or in Rome.

According to Michelle Zehr, it takes a lot of work and dedication to get to this level of performance, with more than 500 hours of practicing year-round and competing.

“We do stress that we want this to be fun, and not just work. Your heart must really be in it,” stated Zehr.

Zehr started dancing when Mrs. Wheatley was in charge of the program in Mitchell.

“Mrs. Wheatley was a very successful dance coach herself, and I hope she is pleased with the way I have coached these girls,” added Zehr. Zehr has been in charge of the program for more than eleven years.

Zehr attended college at Indiana University and graduated with an English major. During college, she opened up a business teaching dance lessons while attending college. She married her husband, Adam, and stays at home taking care of their son, Jarrett.

“I am pleased how the dance program continues to grow, and do not see myself leaving anytime soon,” said Zehr. “One of the many things I have learned is that you cannot be old-school in teaching these students today. They are connected to social media, and that has led to some of the success of our program. Social media has allowed us to be able to connect to other dance programs across the nation. We used to spend a lot of money on our outfits for the group, but now have relied on other groups to donate or we purchase their outfits at a reduced price, which has saved us a lot of money.”

Zehr says over the years, the school system only allowed the team to go on trips around Christmas, Thanksgiving, or Spring Break.

“We want to thank the school system for allowing us to compete this year around March. We will only miss a couple of days of school, but they permitted us to compete in Orlando,” she added.

It will cost the group more than $11,000 to be able to enter the Orlando competition.

“The community has come through for us, raising money so we can attend the contest,” Zehr added. “The support aided, so the girls do not have to pay out of pocket for the competition. These girls have also worked to raise the money by picking up trash at the 4-H fairgrounds as well as the Persimmon Festival in Mitchell. These girls are not afraid of work.”

“I want to say THANK YOU! In a huge way to our community for their support of our program,” she added.

The next fundraiser for the Stingerz will be “Dancing with the Stingerz” on September 14 in the Mitchell Jr/Sr High School Auditorium with a spaghetti dinner served before the event.  Last year, the event was held at the Mitchell Opera House and tickets sold out quickly.

“We hope by having the event at the school we can have more people attend the event,” Zehr added.

The Junior High Dance Team will be part of this year’s fundraiser. The cost for an adult ticket is $20 and $10 for students K-12 for just the dancing event. For those who want to take part in the dinner and dance event, tickets are $30 for adults and $20 for students K-12.

The “Dancing with the Stingerz” is much like “Dancing With The Stars” television program, but each team member dance partner will be local celebrities.

This year’s celebrities include:

According to Zehr, it was not hard to find the dancing partners because many volunteer. The group has had to turn some participants way because of an outpouring of support.