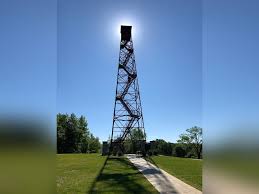 (BLUFFTON) — Restoration work has been completed on a 100-foot-tall fire tower in a northeastern Indiana state park that dates to the 1930s.

The state Department of Natural Resources is planning a dedication ceremony on Friday for the tower in Ouabache (WAH’-bash) State Park near Bluffton. The Friends of Ouabache State Park group raised $75,000 for the project, which included construction of a plaza and wheelchair-accessible sidewalk with commemorative bricks and seating.

The park’s fire tower was built by Civilian Conservation Corps workers during the Great Depression to help observers spot wildfires in the area along the Wabash River south of Fort Wayne.

Friday’s activities will include guided climbs up the tower and a program on the history of such fire towers.