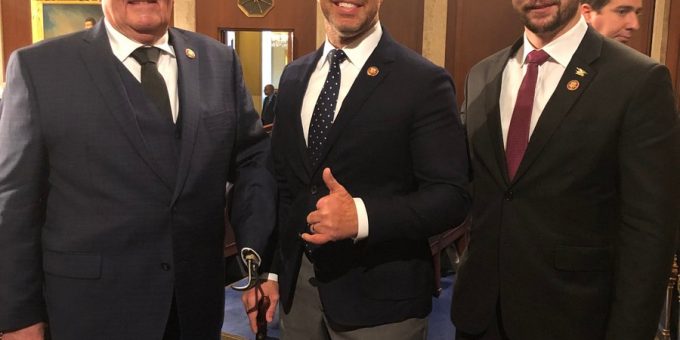 (INDIANAPOLIS) – Congressmen and combat veterans Dan Crenshaw (R-TX), Brian Mast (R-FL) and Jim Baird (R-IN) will be the special guests at the 2019 Team Holcomb Fall Dinner on October 14 at the JW Marriott in downtown Indianapolis.

“As Americans, we’re proud of our veterans and we’re proud to support the men and women who have made sacrifices in the name of freedom,” said Kyle Hupfer, chairman of the Indiana Republican Party. “Earlier this year a tweet from Congressman Mast went viral because it embodied the resilience and American spirit from three of our nation’s wounded combat veterans, including Indiana’s own Congressman Jim Baird and Congressman Dan Crenshaw, who gave the nation an unforgettable lesson in forgiveness after being unnecessarily mocked on Saturday Night Live. We’re excited to welcome these three patriots to center stage in Indiana, where we can properly honor their courage and the sacrifices they have made.”

Congressman Crenshaw was a U.S. Navy SEAL who served in Iraq, Afghanistan, Bahrain, and South Korea. He was awarded two Bronze Stars (one with valor), the Purple Heart, and the Navy Commendation Medal with Valor, among others. He was first elected to the U.S. House of Representatives in 2018.

Congressman Mast served in the U.S. Army and the elite Joint Special Operations Command (JSOC) while deployed in Afghanistan. He earned the Bronze Star with valor, The Army Commendation Medal for Valor, the Purple Heart, and the Defense Meritorious Service Medal. He was first elected to the U.S. House of Representatives in 2016.

Congressman Baird was in the U.S. Army and served in Vietnam, earning a Bronze Star and two Purple Hearts. Serving Indiana’s Fourth Congressional District, he was first elected to the U.S. House of Representatives in 2018.

A tweet posted by Congressman Mast in January — with the caption, “5 eyes. 5 arms. 4 legs. All American.” — went viral and brought much attention not only to these fine patriots but to all American veterans who have served their nation.

The dinner will also feature top Indiana Republican elected officials. Those interested in purchasing a ticket can learn more here.