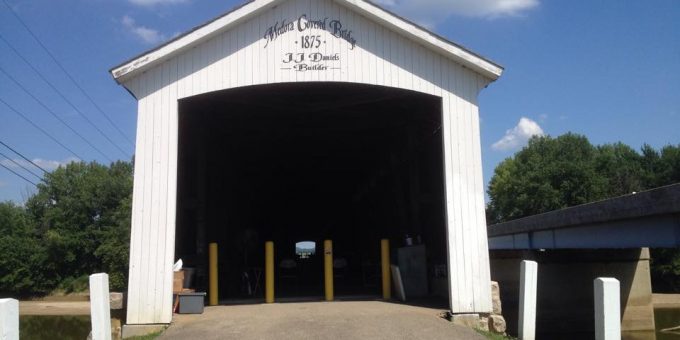 (MEDORA) – Friends of the Medora Covered Bridge will pay to have a security system installed in the historical bridge.

The bridge – constructed by J.J. Daniels in 1875 – is one of the longest historic covered bridges in the country at 461 feet long. It spans the East Fork White River parallel to State Road 235.

The group hopes the system will help deter vandalism to the bridge that was added to the National Register of Historic Places in 2007, and restored in 2011.

Morris Tippin, who is a member of the group, and area electrician Brad Nolan presented the plan to the County Commissioners.

The plan includes adding high-resolution cameras with night vision and internet access on the bridge. The cameras will be installed at the entrances, different areas of the bridge and in the parking lot.

The cameras will allow the group to watch the cameras in real-time, and the photos will be time stamped.

The group says Duke Energy will bore a line to set a transformer to run electricity. Nolan will construct a 6-foot-tall, 4-foot-wide wall where a panel will be placed.

The cost of the project was not available but will be paid for by the group’s fundraising efforts.

Commissioners also voted to pay for future fixed costs like internet and electricity through the county’s bridge maintenance fund.

In January, a reward was offered for information that would lead to the arrest and conviction of those who were responsible for a half-dozen graffiti marks placed on the bridge structure.