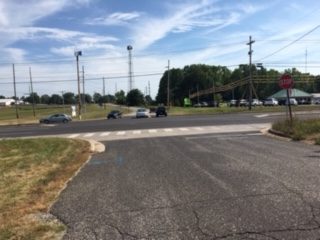 (BEDFORD) – The Bedford Redevelopment Commission has committed more than $600,000 for a proposed roundabout at John Williams Boulevard and Beech Street. Officials say the intersection is dangerous with visibility being obstructed at the intersection by a hillcrest.

The visibility has made it difficult for motorists to pull out of northbound Beech Street. With the construction of the roundabout, speeds should be reduced as well as it keeps traffic moving at the busy intersection, according to Plan Commissioner Dan Kirk.

The City of Bedford has looked at adding a stoplight at the intersection, but they note that there is a risk of more accidents occurring with motorists running red lights. The purpose of the project is to reduce accidents.

Earlier this year a traffic accident occurred at the busy intersection, resulting in a fatality.

Bedford Police Chief Terry Moore stated, “Putting in a roundabout far outweighs the benefits of a stoplight. And motorists are more prone to running red lights.”

According to Dan Kirk, traffic has increased on John Williams Blvd. and a number of accidents have occurred at the busy intersection.

Adele Bowden Purlee asked whether there were enough funds to be able to commit to the project especially with the commitment already made to the Stone Gate Education Project.

Clerk-Treasurer Marsha Piefer stated that there were enough funds to make sure the project moves forward.

Penny May stated, “This is an intersection that definitely needs attention. We all have experienced [moments] at the intersection to which we were glad we did not get hit.”

Dan Kirk added that since the roundabout has been put in at Lincoln Avenue and John Williams Boulevard that there have not been any accidents. Due to that success, he says that this location would be the best place to put in another roundabout.

The total cost of the project will be $1.6 million, with the City of Bedford planning on applying for a Community Crossings Grant around January 6, 2020, to help pay for the project. Around $500,000 will come from the Motor Vehicles and Highways Fund, $600,000 from the Redevelopment Commission and the remaining from grant funding.

The commission approved the commitment of funds to the project.

The board approved a payment of $2,341.63 to Crowe for services rendered in connection with Preparation and Delivery of Annual Tax Increment Finance Notification Calculation and Letters of Discussion of TIF matters.

State law requires that all taxing units are notified where the TIF is being used and the amount that each entity has lost due to Tax Incremental Financing.

The Redevelopment Commission also approved an additional $4,500 for additional work that is required by State Law. The group takes care of reporting to the State Gateway System, and other reports that must be filed to the State of Indiana. The Redevelopment Commission reports that the reports are done in a timely manner and they are pleased with their services so far.

The final matter before the board was the final payment for an Indiana Department of Transportation invoice for work orders on the Plaza Drive Extension. A payment of $6,700 was approved by the Commission. Crider and Crider were slow in getting some of the work orders completed according to city officials. The payment will complete the Plaza Drive South Project.

“There are a lot of critics of TIF funds, but these projects, such as South Plaza Drive South, are a great economic development project,” says Bedford Mayor Shawna Girgis.