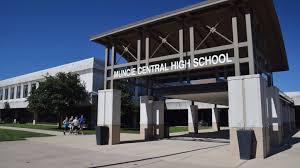 (MUNCIE) — A 15-year-old boy arrested with a handgun outside of Muncie Central High School allegedly told an acquaintance he “might have to shoot a couple of people.”

The Muncie Central High School student was arrested Aug. 7 outside the school.

Court records filed in delinquency proceedings against the teen say he showed an acquaintance the handgun outside the school, saying he was bringing it to school because he had a “beef” with some people there.

A female teen texted a school guard about the incident after the male allegedly told her “he might have to shoot some people.”

Prosecutors say the male teen would be facing six charges, including possession of a handgun on school property, if he was an adult.