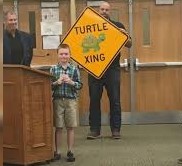 (WEST LAFAYETTE) — A northern Indiana city has installed “Turtle Xing” signs along a road after an 8-year-old boy warned the mayor that motorists were running over turtles on the move.

The second-grader wrote that “there are turtles crossing the road and they need our help.” He included a hand-drawing of a car stopped and someone carrying a turtle, captioning that image with, “We saved a baby turtle.”

The Journal & Courier reports that the mayor instructed the city’s street department to make “Turtle Xing” signs. Some of those signs recently went up along Cherry Lane. Other signs will be installed along a second road.