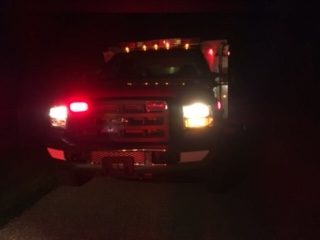 According to Fire Chief Jeff Long, “A fire was set to the Shazam Stage that they brought themselves. This was in front of the main stage, as well as setting other debris that was placed on the fire. “

Because the police department could not ensure the safety of the fire service personnel, the department remained on the outside of the park property making sure the fire did not reach any place outside the confines of the Lawrence County Recreation Park.

The firefighters remained on the scene until about 4:45 a.m. before they were able to make sure no other fire hazards existed. The fire was allowed to burn itself out.

According to Chief Long Sunday, there were multiple emergency medical runs within the township that had to be answered by out of county ambulances. The patients of these emergencies within Perry Township had to wait for an ambulance from Orange County and Monroe County to respond, causing a delay in the transporting them to the hospitals. Long was not able to provide the number of medical transports this weekend