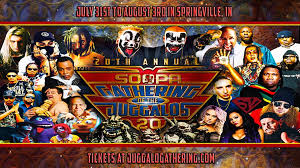 (UNDATED) – Those attending the 20th annual Gathering of the Juggalos are beginning to arrive in Springville. The event starts Wednesday and runs through Sunday at the Lawrence County Recreational Park.

Police and emergency responders have their plans in place.

The music festival is described as “A party deep in the woods, in the shady trees, celebrating two decades with the Juggalo homies.”

The festival draws on average 10,000 people each year and has developed a reputation for unruliness with drugs, overdoses, fights, and arrests.

Founded in Detroit in 1989, Insane Clown Posse performs a style of hardcore hip hop known as horrorcore and is known for its elaborate live performances. The duo has earned two platinum and five gold albums. The group has established a dedicated following called Juggalos numbering in the “tens of thousands”.

Juggalos often paint their faces to look like clowns, and some sport tattoos of “hatchetman,” the logo for Psychopathic Records, ICP’s recording label.

Insane Clown Posse is known for their elaborate concert performances. In Marley Brant’s Tales from the Rock ‘n’ Roll Highway, Bruce described a typical performance: “We toss out, kick out, and shoot out into the crowd about three to four hundred two-liters of Faygo at every show…We bring with us monsters, dancing clowns, girls, trampolines, and pure and absolute madness to the stage.”

According to the National Gang Intelligence Center, there are more than one million self-proclaimed Juggalos across the United States. It is estimated that 85-90 percent of self-described Juggalos are peaceful, non-criminal music fans.

Sheriff Branham says rumors about ticket sales have been exaggerated.

“As of Tuesday, the promoter stated that he is still expecting between six and eight thousand to attend,” Sheriff Branham added.

“Any time there is a large event or gathering of people, the chances of major accidents and incidents naturally go up,” said ISP Sgt Curt Durnil. “In order to help ensure the safety of the community, the local citizens, and the event attendees, the Indiana State Police will provide increased traffic and criminal enforcement presence.

“The lack of any major crashes or incidents during the Boogie Event was proof that an increased police presence at such events helps ensure the safety of all involved,” Sgt. Durnil added.

Should anyone see suspicious or criminal activity, call 911 and report it immediately.

The promoter has contracted with unarmed security for on-property security – they are onsite now.

“The promoter also hired off-duty law enforcement from multiple area agencies for the front and back gates, which is the same model used for the ABATE Boogie,” Sheriff Branham says. “The off-duty presence begins tomorrow morning until Sunday morning on will be on duty 24 hours per day.”

Officers from the Sheriff’s Department will also be conducting DUI Task Force Patrols in the area. Those officers are being paid for through a grant.

“Regular duty officers from the Sheriff’s Office will also be concentrated in the area when not responding to calls for service in other parts of the county,” Sheriff Branham added.

Indiana State Police will also conduct saturation patrols in the area and have additional troopers available to assist with routine calls for service.

“We plan to have daily briefings with ISP and with Emergency Management as the week progresses,” Sheriff Branham added. “We do not anticipate any more problems with the crowd at this multi-day event than we would at any other multi-day event with six to eight thousand people. We are taking this approach with the intent of assuring our citizens and our community that we are keeping them and the attendees safe.”

The biggest concern about the event is the heat – temperatures are forecast to hover around the mid to high 80s with the humidity on average, around 65 percent.

Officials are concerned there will not be enough ambulances to serve the area if people begin to get dehydrated.

While ambulance resources are often stretched thin in the county, AMR ambulance service is contracted to cover the event.