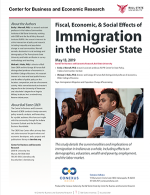 (MUNCIE) – Despite fears that immigrants drive down wages and hinder Indiana’s economy, these newcomers should have a positive impact on the state – particularly in rural areas – for the foreseeable future, according to a new report from Ball State University.

“Fiscal, Economic, & Social Effects of Immigration in the Hoosier State,” found that  25 percent of the population growth in Indiana between 2000-2015 was due to increasing immigration, said Emily Wornell, a research assistant professor with the Indiana Communities Institute at Ball State. She co-authored the study with Michael Hicks, director of the University’s Center for Business and Economic Research.

Cities and small towns throughout the South and Midwest are experiencing booms in immigration. Communities, counties, and states that have experienced large increases in immigrant population since the 1990s are called “new immigrant destinations,” and Indiana is one such state, Wornell said.

“Immigration in Indiana is fiscally, educationally, and demographically important, and likely marks an environment of increasing economic opportunity,” she said. “Overall, we find that immigration, regardless of authorization status, is an important source of fiscal, economic, and demographic health for Indiana’s future.”

Wornell notes that Indiana’s recent rising rate of immigration followed a period of long, steady decline. The study found that immigrant population growth is helping to stabilize the trend of declining populations in 19 Indiana counties, which may be particularly important in rural Indiana.

“Immigrants may represent the best chance for population growth in these communities in the foreseeable future. These newcomers will bolster the local job markets, fill up classrooms, and become contributing members to our communities.”

In recent years, the majority of immigrants have come from Mexico (31.6 percent), followed by India (9.1 percent), and China (7.9 percent). The Philippines and Myanmar round out the top five, with 3.3 percent and 2.9 percent respectively.

The study details the current realities and implications of immigration in Indiana as a whole, including effects on demographics, education, wealth and poverty, employment, and the labor market. The data used in this report was from the 2012/2016 five-year estimates of the American Community Survey (ACS). The study was produced by CBER for Conexus Indiana.

Labor market – Workers with some college or a college degree or higher experienced no negative effect from immigration.

The study found that during 2002-2016—a period of rapid growth in immigration—there was no impact on that wages of incumbent workers (those who have been working at the same firm for more than 90 days), and only a modest impact on the wages of new hires. Specifically, workers with a high school diploma or less saw modest declines in wages—$48 and $69 per month for less than high school and high school graduates respectively—due to increased competition.

The study also found that better-educated workers (some college/bachelor’s degree or higher) experience labor demand wage increases from immigration resulting in $278 and $414 more per month, respectively.

Public Services – The study found that immigrants are net contributors to the nation and state’s social welfare and public assistance programs.

According to the study, not only do immigrants, including unauthorized workers, pay into the public service system through income, payroll, sales, and property taxes, they tend to use fewer services than the native-born population, and receive less benefit when they do use services.

Researchers also noted that immigration (measured as the number and prevalence of English Language Learners) does not appear to affect educational quality or outcomes.

“Based on our analysis, it is clear that immigration into Indiana, including unauthorized immigrants, is a net benefit to the state and should be welcomed in every county and municipality,” said Hicks, the George and Frances Ball Distinguished Professor of Economics and Business Research. “At the same time, we acknowledge that there may be costs to some locations and populations. However, these costs appear to be transient, affecting only starting wages for workers with a high school diploma or less. We find no long term negative impact on wages.