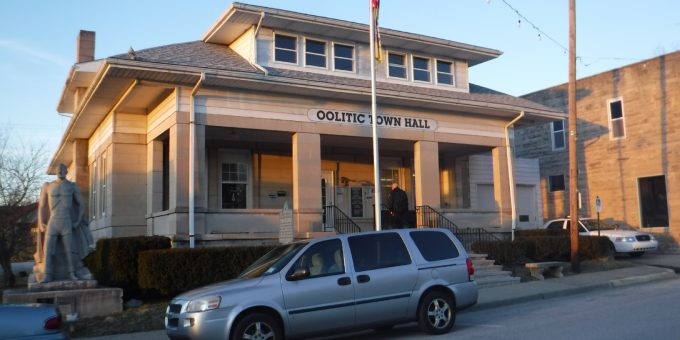 In 2010, the officials identified at least 19 different areas that needed to be addressed. As time progressed some of these issues began to cause some major issues – including washed out roadways.

The challenge that the Council faces is identifying which projects to complete first with their limited funds.

Even with the grant funding, the town will have to locate additional funds to complete the projects that will cost between $600,000 to $750,000. The grant will require a 10 percent match from the town.

Those other funds will include a loan as well as current reserve water/sewer funds.

The construction and additional costs have not yet been finalized.

The town is conducting a survey of 39 residents to try and qualify for the grant funding. Officials have until August 15, 2019, to have the survey completed. Officials say that by the August meeting they should have better cost estimates of how much each project will cost.

The contract work near the Jenkins property has not begun. Officials awarded the contract to Tipton Construction. Work has been delayed because poor weather conditions delayed the construction company from completing other projects, thus putting them behind schedule. There were also questions regarding the marking of utility lines which has not been completed.

There were no other updates on the Oolitic School. Developers are searching for more property around the building to make it more marketable to buyers.

Town Councilman Glen Gross addressed some issues that residents have contacted him about.

Ted Maze was questioned about enforcing town burn ordinances, to which residents are required to notify the town if they plan to have an open burn in the town limits. Either by informing the Clerk Office, or Fire Department. The fire in question was not attended by the resident, which is a requirement.

Glen Gross questioned officials about town employees not notifying the Town Council before going on vacation. Gross stated that by law employees must notify the council in advance of any vacation.

Gross was also asked about creating more policies for roadblocks the town conducts. This includes safety vests and making sure children have vests. The town normally hosts six roadblocks a year.

The council also asked the town attorney who would be responsible for damage done by cement or concrete trucks on a housing construction project done close to the roadway.  The roadway was severely damaged and needs repaired. Attorney Greg Pitman said it would be the contractors’ responsibility to repair the damage.

The Street Department of Oolitic is back down to only two employees after one of the employees quit after finding a better paying job. The street department employees are paid $14 an hour, and president Bill Kendall told the Town Council that they may need to start looking at a better salary ordinance in the near future.

With only the two employees at the Street Department, they have been able to accomplish a lot of work within the last couple of months.

Zack Bell reports that they are still about two months behind; however, he gave the Council a report on their progress.

In addition, Bell reported that two issues that the Council wanted to be fixed are now corrected.

Bell also thanked the Clerk/Treasurer for helping him get adjusted to the new job. He also thanked the Town Council for their support as well as Marshall Jon Jefferies and Ted Maze for notifying them of water issues, sewer and other places that need to be taken care of.

“The list is long, but we are working through the list to try to get things taken care of,” stated Bell.

During the meeting resident, Leah Gross asked Town Council member Johny Spears why he was not running for Town Council. Spears replied that he was moving out of the town, and would not be able to run for the position. She also voiced concerns that current Clerk-Treasurer Jessica Staggs home was up for sale and asked if she would be running for office.

President Bill Kendall told Gross she was out of line and should not be asking personal questions in a public meeting. She then asked why other council members were not included in the discussion of the Lawrence County Community Crossings grant, which upset Kendall who requested Town Marshall Jon Jefferies to come to the meeting if Gross continued to ask questions.

Clerk- Treasurer Jessica Staggs told WBIW that she is a current resident of the Town, and she is running for Clerk-Treasurer and that will not change.