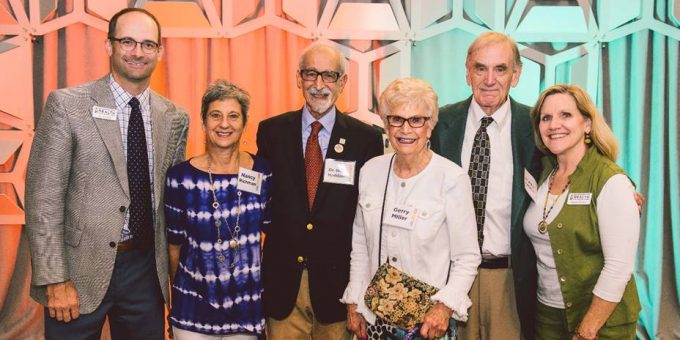 (BLOOMINGTON) – The second Impact Local Healthcare Awards was held at Monroe Convention Center last week, welcoming more than 200 guests and celebrating the medical achievements of two men and one organization. Dr. William Anderson, Dr. John Miller (posthumously), and Volunteers in Medicine were recognized for their significant, lifelong contributions of service to local healthcare.

Criteria for selection included excellence in professionalism, community leadership, and service, and exemplary contributions to the enhancement of local healthcare.

BHF Board Chair Angela Parker opened the program by highlighting BHF’s recent successes including over $1M in gifts BHF made to various local organizations in 2018 that address the community’s most pressing health needs. Ms. Parker stated, “The Foundation has allocated over one million dollars to impact health right here in Bloomington… Our grants in support of enhancements to local healthcare are making a daily impact on the lives of those in our community. We still have a long way to go – but together we move forward towards a healthier tomorrow.”

BHF President & CEO, Jonathan Barada, then took the stage thanking guests and honorees and recapping the recent transition of Bloomington Hospital Foundation to Bloomington Health Foundation stating, “After 50 years of operating as the sole philanthropic agent of Bloomington Hospital, in late 2017 BHF Board of Directors voted to focus more specifically on the community health aspect of its mission. As part of this vote, the board both affirmed its independence as a locally controlled, independent non-profit in our community and acknowledged the significant work that is before us regarding the health of our community… Our expanded community health focus affords the opportunity for the Foundation to provide cross-sector leadership, collaboration, and coordination in addressing our community’s most pressing health needs.”

Dr. William R. Anderson was the first awardee of the evening: Anderson was raised primarily in Iowa and graduated from the University of Iowa School of Medicine in 1958. After completing fellowships and internships around the country, he returned to the University of Iowa in a teaching position for 5 years before becoming a captain in the US Army. He finally settled in Bloomington in 1970 where he began his practice with Dr. Owens, Owens and Anderson OBGYN, which evolved into what is now known as AEGIS Women’s Healthcare.

His delivered over 3,000 babies in his career, authored several publications on neonatal health, established the Janet and Bill Anderson OB Nursing Education Endowment Fund to support continuing education for local Obstetrical and Neonatal Nurses, was named a Herald-Times “Volunteer of the Year,” and donated his time to local organizations such as The Shalom Center, St. Mark’s United Methodist Church, Volunteers in Medicine, Bloomington Health Foundation, among others.

Video testimony from his friend and colleague Dr. Brandt Ludlow.

During his acceptance speech, Dr. Anderson acknowledged two specific people: the first was his colleague Dr. Walter Owens: “He taught me all the ins and outs of private practice. In addition to mentoring and teaching, he was probably my best friend. I’ve always had very fond memories of Walter and his family and our group of Bloomington OB/GYN.”

Dr. Anderson continued, “the other and most important person I want to recognize is my wife. Sixty-one years of marriage when I was doing my thing outside of the house and Janet did all the family work: she ran the house, raised three great children, she was a silent volunteer… While she did all these things she stood by my side. For that, I’ll always be appreciative. Her presence in my life made me who I am today and frankly why I’m up here. This award, I want to share it with Janet.”

Dr. John M. Miller was recognized next: A native of Iowa City, Iowa, Miller received his bachelors and medical degrees from the University of Iowa. He moved to Bloomington in 1954, leaving for three years during his service in the US Navy. He returned to Indiana University in 1957 and during his employment, he held various positions at IU including University Physician, Assistant Director and Director for Student Health Service, Director of Sports Medicine and Professor of Kinesiology.

He worked diligently to improve safety in sports, a passion for which he was recognized with the President’s Challenge Cup Award for Outstanding Contributions in the Field of Sports Medicine from the National Athletic Trainers Association. Other awards and accolades he earned included the Higham, Neilson, Whitridge, and Reid Research Award, presented by the American College Health Association, the Junior Chamber of Commerce Distinguished Service Award, and the Ruth E. Boynton Award from the American College Health Association.

Before Dr. Miller’s passing in 2018, he authored several publications and papers, served 35 years on the board of the Salvation Army, and volunteered with many local organizations.

Video testimony from his friend and colleague Mark Deal.

Dr. Miller’s wife, Geraldine Milller, accepted the award on behalf of her late husband saying, “among John’s files there was a folder with a saying inside that reflects his philosophy of life: ‘A man has made at least a start on discovering the meaning of human life when he plants shade trees under which he knows full well he will never sit.’”

She continued, “This past year I have been reading two notebooks of letters: one notebook is written by athletic trainers, the other notebook is by athletes that wrote letters. So many of these letters included the same words over and over: he’s a good listener, he’s compassionate, he is caring, he is kind, he is loyal to his professional ethics and beliefs, he is quiet, he’s reserved, he’s reliable and he’s certainly generous with his time and financial resources to help those in need in this community and beyond.”

Organization Volunteers in Medicine (VIM) was the final awardee of the evening. VIM fills an essential gap in the community’s continuum of medical services for people who need healthcare support and are living at or below 200% of the federal poverty level. In cooperation with others in the community, Volunteers in Medicine provides quality primary and preventive healthcare without cost to the medically underserved in Monroe and Owen Counties. VIM partners with others to close the health equity gap by providing a place where need and resources come together with compassion and dignity to promote healing, to enhance health, and to create hope.

Dr. Rajih Haddawi founded Volunteers in Medicine in 2007 after a stellar 35-year career as an orthopedic surgeon. He was the first hand surgeon in Monroe County and the first to perform arthroscopic knee surgery and joint replacement surgery of the knee, hip, and hand. He used his talents for the better of the community by serving as the physician volunteer for VIM and as chair of the VIM board.

Dr. Haddawi and VIM Executive Director Nancy Richman accepted the award. Dr. Haddawi traveled back to Bloomington for the first time since relocating to North Carolina just to accept the award stating, “It is a cause of passion. You have to feel for your fellow person who never had the chance to grow up in your environment, in your home.”

He also shared that before he started VIM, he surveyed over 50 community members to ensure the program would be sustainable. The response was overwhelming with many suggesting he reach out directly to Bill Cook, founder of Cook Medical and local philanthropist. Dr. Haddawi first called his fellow IU Foundation committee member, Gayle Cook, who connected the doctor to her husband. Dr. Haddawi was able to see him later that same day to pitch his idea.

“Rajih, this is a great project. I’ve been waiting years for someone to come to me with this,” Mr. Cook said to Dr. Haddawi. He also stated he would write a check as soon as Dr. Haddawi was ready to launch the organization.

Dr. Haddawi attributed VIM’s success to the community, “it is the people. Truly everybody contributed. They heard there was a cause to serve the need.”

Executive Director Nancy Richman asked past and present VIM employees, board, and volunteers to stand. About half of the 200 guests in the room stood. She then asked donors to VIM to stand. Nearly the whole room was standing.

Closing the program, Mr. Barada shared, “at the end of the day it is these leaders, the people and organizations that we celebrate tonight, who are on the front lines of making our community healthier. They have touched thousands of lives in our community with compassion and dedication and often outside of the spotlight. It is these leaders, and many more like then, that make our community successful by making it healthy.”

About Bloomington Health Foundation:Bloomington Health Foundation invests philanthropic support in partnership with the people and organizations of our community by convening, seeking input and leveraging existing assets to implement innovative, evidence-based solutions to our community’s health concerns. Our longstanding history, local connection and proven ability to solve health problems inspires us to continually work to improve lives. Our staff and board members are passionate people who work to tackle tough problems and find innovative solutions for our community.