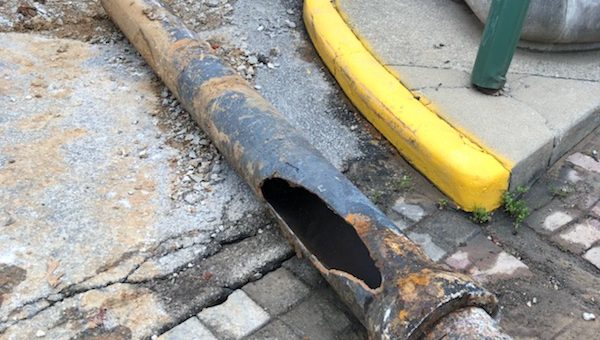 (BLOOMINGTON) – City of Bloomington Utilities (CBU) crews have repaired the water main break that occurred Sunday night underneath the intersection of Kirkwood Avenue and Washington Street.

Crews worked through the night to replace a four-foot section of pipe.  Installed in 1973, the 8-inch cast iron pipe had no previous record of failure.  Water service has been restored to all customers in the vicinity; those who had lost service have been notified of a boil water advisory in effect until 8 a.m. Tuesday, July 23.

CBU employees are currently working with staff from the Street Division of the Department of Public Works to repair the road and other infrastructure that was displaced by the main break and resulting floodwaters.  The intersection remains temporarily closed. It is estimated that normal traffic patterns will be able to resume on Thursday, July 25.

Motorists are advised to find an alternate route while work continues in the area, or to adjust their speed accordingly when traveling near the work zone.

If you have questions or concerns, please contact the City of Bloomington Utilities at 812-339-1444.