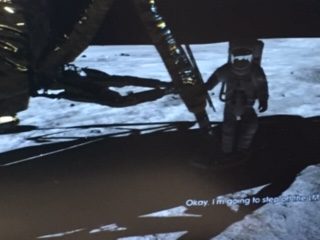 (BEDFORD) – The young and old came out to the Stonegate Arts and Education Center to celebrate the 50 years of Apollo 11 landing on the moon sponsored by the Bedford Public Library.

The Bedford Public Library was chosen in 2017 as one of 75 libraries across the nation to receive a three and half year long NASA @ your library grant, which provides training and equipment for innovative and educational space themed STEM Programming.

The evening let the attendees revisit and learn more about one of the country’s adventures. The Director of Operations for the Bedford Public Library talked of how during that time period the national space program united a nation.

There were virtual reality stations throughout the building ran by Ryan Cursto that let you get the feeling of what it was like walking on the moon.

Other stations let you stamp out an official Apollo 11 badge for the kids. As well as period style hors d oeuvres and astronaut ice cream.

“This is about embracing our past and heading into our future. The moon landing was landing was such an exciting moment in our history,” said Watson.

Joanne Jacobson was in college when the Apollo 11 landed on the moon and she did not watch it on television like all of her other college room mates. But she remembered one of her room mates made a model following the landing. She came tonight to see what she missed on that exciting evening. Jacobson stated that she now lives in Bedford but at that time lived in Minnesota.

55-year-old Drew Dillman of Mitchell was 5 at the time of the landing. And from his memory he believes his parents allowed him to watch the moon landing by letting him stay up late. “I was interested in the space program back then, playing with rockets. I grew up knowing Gus Grissom, but we called him Virgil back then. My mom and dad went to church with him,” said Dillman.

Dillman was able to see what he believes was the fourth Challenger mission go up into space from Titus, Alabama which is not to far from the Kennedy Space Center. “My uncle was in the Coast Guard and all we heard was just a swoosh,” says Dillman. ” We need to continue the space program,” Dillman added.

Lawrence County has a rich history with supporting NASA and our astronauts. “As home to Virgil ‘Gus’ Grissom, Charlie Walker, and Kim Bowersox, we have a strong and enduring connection to the space program,” says Susan Miller from the Bedford Public Library.