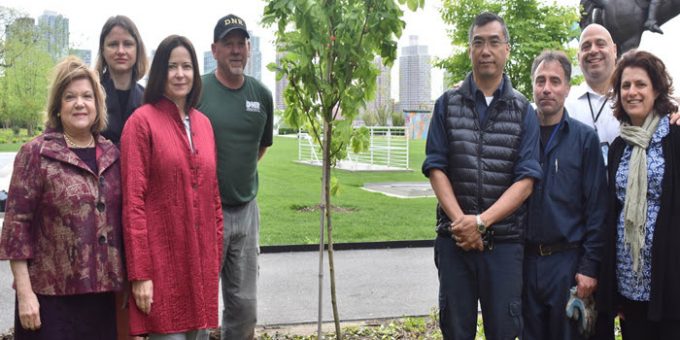 (UNDATED) – “The Diary of a Young Girl,” aka “The Diary of Anne Frank,” chronicles Frank’s time of hiding with her family from the Nazi occupation of the Netherlands during World War II.

A genetic ancestor of an inspirational horse chestnut tree mentioned in the book, a sapling of which was grown at DNR Forestry’s Vallonia State Tree Nursery, was planted by DNR Forestry’s Bob Hawkins in the Peace Garden of the United Nations building in New York City on May 9, 2019. Hawkins manages the nursery.

Frank’s writings mention a horse chestnut tree she could see out of her window, and how it helped give her hope of surviving. In 2010 that tree collapsed due to disease. Before that happened, seed from the tree was collected. The stewards at the Anne Frank House in the Netherlands grew and distributed saplings from the seeds to numerous locations around the world.

The Anne Frank Center for Mutual Respect, which is in New York, received 11 of the saplings to donate to worthy educational organizations across the United States.

After a three-year safeguard quarantine, the saplings were cleared for planting in January 2013.

According to Hawkins, all other saplings from the original parent tree died—except for the three cared for by the Vallonia Nursery. Those three saplings were originally given to The Children’s Museum in Indianapolis, which passed them on to the nursery, where they could receive better care.

In 2014, Hawkins, per request of the National Anne Frank Foundation, delivered and planted the first sapling on the Capitol grounds in Washington D.C.

“It is growing well and has a plaque stating its historical importance,” Hawkins said.

Plans are in the works for a site for the third tree.

More about DNR Forestry’s nursery program is at forestry.IN.gov/3606.htm.

More information about the Anne Frank Sapling Project is at annefrank.com/sapling-project.