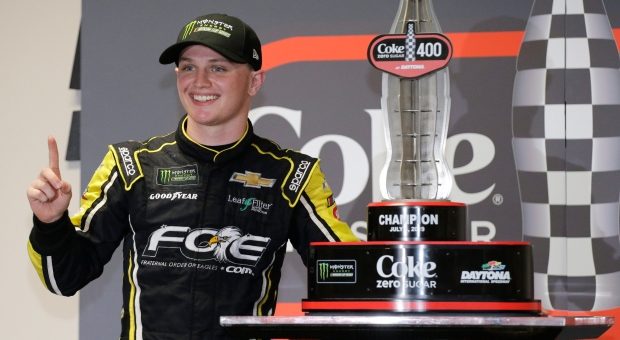 (DAYTONA BEACH, Florida.) — A young driver from Winamac, Indiana is the winner of the last summer NASCAR race at Daytona International Speedway.

Justin Haley, driving for Spire Motorsports, won the rain shortened Coke Zero Sugar 400 yesterday in Daytona Beach. Haley assumed the lead of the race after Kurt Busch relinquished the lead choosing to pit during a caution period after a large wreck took out over a dozen cars.

It was during this caution that lightning was spotted less than 8 miles from the track.

Under NASCAR rules, if lightning is spotted within that radius of the track car must be pulled off the track and wait 30 minutes for the bad weather to clear. The weather never did clear and NASCAR called the race with just 33 laps remaining.

“I would have been happy with just a lead lap finish. This is only my third Cup start ever,” Haley said once the race was called. “There was no expectation to win. It wasn’t even a thought in my mind.”

Haley, who races full-time with Kaulig Racing in the NASCAR Xfinity Series, finished second just two nights prior in the Firecracker 250 as part of a 1-2-3 sweep by he and his Kaulig teammates Ross Chastain, who won the race, and AJ Allmendinger, who finished third.

“I was really focused on the Xfinity race,” Haley added. “When I finished second in that it was a bummer. Definitely happy for everyone at Kaulig Racing, but to come over her with Spire Motorsports and do something special with a new team is pretty unbelievable.”

At just 20 years, two months, Haley is is the third youngest driver to win a race at Daytona. He began his racing career running quarter midgets in Kokomo in 2008. He eventually worked his way up to the NASCAR K&N Pro Series East in 2014 and won a series championship two years later.

During that full-time stint in the K&N Pro Series he made some sporadic appearances in the Camping World Truck Series and eventually landed his full-time ride in the Xfinity Series with Kaulig.

Because Haley is competing full-time in the Xfinity Series, the win at Daytona means Haley is still not eligible to compete in the Monster Energy NASCAR Cup playoffs. Normally, winning a Cup race means drivers secure a spot in the NASCAR post-season.

Haley will go down in history as the last driver to win the summer Daytona race on it’s Fourth of July weekend date for the time being.

The race will be moving to September next season as the last race of the NASCAR regular season. Replacing it over the Fourth of July holiday will be the Brickyard 400 at the Indianapolis Motor Speedway.