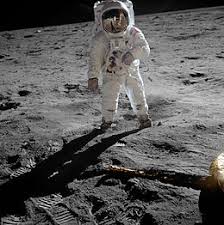 (BEDFORD) – This summer marks the 50th anniversary of NASA’s Apollo 11 mission and the Bedford Public Library is commemorating the momentous occasion with an anniversary celebration at StoneGate Arts & Education Center on July 15, 2019.

Apollo 11 was the spaceflight that landed the first two humans on the Moon. Commander Neil Armstrong and lunar module pilot Buzz Aldrin, both American, landed the Apollo Lunar Module Eagle on July 20, 1969, at 20:17 Coordinated Universal Time (UTC – is the primary time standard by which the world regulates clocks and time. It is within about 1 second of mean solar time at 0° longitude and is not adjusted for daylight saving time).

Armstrong became the first person to step onto the lunar surface six hours later on July 21 at 02:56:15 UTC; Aldrin joined him 19 minutes later. They spent about two and a quarter hours together outside the spacecraft and collected 47.5 pounds (21.5 kg) of lunar material to bring back to Earth.

Festivities will take place from 5 p.m. until 7 p.m., which include an official NASA webcast of the Apollo 11 mission and a virtual reality simulation of the spacecraft’s launch and landing in a 1960s atmosphere — complete with period-style hors d’oeuvres and astronaut ice cream.

Lawrence County has a proud heritage of supporting NASA and our astronauts. “As the home to Virgil ‘Gus’ Grissom, Charlie Walker, and Ken Bowersox, we have a strong and enduring connection to the space program,” said Bedford Public Library Director Susan Miller.

The Library is looking forward to honoring this connection yet again at the celebration, which will allow the community to revisit and learn more about one of our country’s greatest adventures. The webcast that will be shown will detail the events surrounding the lunar landing and give background information on Apollo 11 and its crew from a new perspective.

In 2017, Bedford Public Library was chosen as one of 75 libraries across the nation to receive a three-and-a-half-year long NASA @ Your Library grant, which provides training and equipment for innovative and educational space-themed STEM programming.

The virtual reality simulation that will be available for guests to experience at the celebration is one such program. Using virtual reality goggles, participants will be able to witness firsthand the inside of Apollo 11 lunar lander, the surface of the moon, and the intensity of the craft’s re-entry into Earth’s atmosphere — all through the eyes of the people who made this extraordinary mission happen.

Director of Operations Nathan Watson hopes this fully immersive experience will take the community on a journey back to 1969. “This is about embracing our past and heading into our future,” Watson said — an idea that ultimately grew into the basis for the event, which combines a vintage atmosphere with opportunities to test out new and innovative technology. “The moon landing was such an exciting moment in our history … there was a lot riding on it, but we persevered. There are so many people who are still around and remember where they were … we want to know where you were and hear your stories.”

This event is open to all ages. Visit the www.bedlib.com or the Bedford Public Library’s Facebook page for more information.