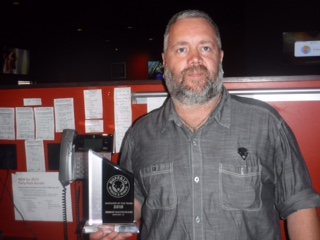 (BEDFORD) – On Tuesday, June 25, 2019 Shane Baughman was named Buffalo Wings and Rings Manager of the Year during a Conference in San Antonio, Texas.

According to Chief Executive Officer Nader Masadeh, manager of the year is one of the biggest awards next to the Franchise of the year award.

“There was no debate, in giving out this award – Shane was deserving of it,” said Masadeh.

“It is how you treat the customer and your employees. If you treat them well they will continue to come. The employees treat our customers well; knowing their wants and needs as returning customers,” said Baughman.

“We also have local musicians perform in our outside eating area every month. With groups like the OCD band, Tax Man, as well as a local man who comes and plays acoustic guitar. Usually, they come and play on a Thursday or Friday evening. We also have motorcyclists come in on a Thursday, and provide a ten percent discount that evening. They like sitting out back and listen to music. Normally groups play the Tom Petty era of music,” Baughman added.

“We had three to four general managers since we opened back in 2011. Shane was hired in May of 2014 as the general manager and he just took to the job,” said Michael Weyer, owner of the local franchise.

“Shane has done an excellent job of making sure quality is taken care of, and he just has a natural touch in running the business,” Weyer stated.

Baughman met his wife in Montana and moved to Indiana 20 years ago. His wife is from Tell City. The couple planned to move back when this opportunity opened up for him. He has three children two who live in Montana, one who resides in Tell City, in addition to three grandchildren. In his spare time, he works at growing his mini-farm.

“Buffalo Wings & Rings continue to make sure the wings are fresh, offer a variety of salads and drinks are provided in a clean environment. The Bedford location executes that level of accuracy,” according to Mr. Masadeh.

“Consumer habits continue to change, we have about five to six generations that eat here, all have different tastes and we try to understand each of their wants and desires,” Masadeh continued. “There is growth in outside delivery, third-party delivery services, and Amazon changing a lot of business trends. There is a lot of disruption in the market. We spend a lot of significant amount of time and money in research. Staying with consumer demands,” Masadeh added.

With more than 80 units across the globe, Buffalo Wings & Rings is changing the sports restaurant category, bringing elevated food and experiences that are accessible and affordable to all. For more information, visit www.buffalowingsandrings.com.