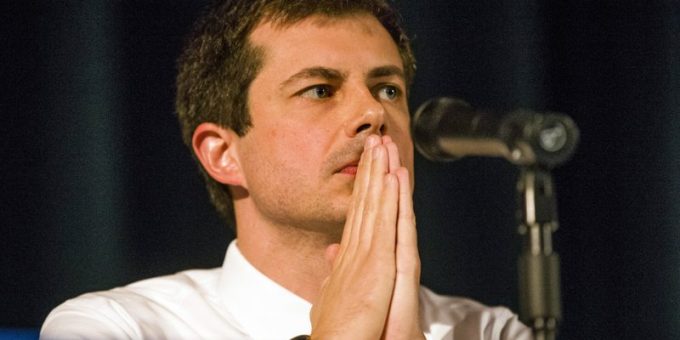 (SOUTH BEND) – The mayor of South Bend and some of the city’s police are at odds over how the shooting of a black man by a white police officer is being handled.

Mayor Pete Buttigieg spent some of Monday trying to answer concerns that he is playing politics because he is running for president.

“On a national TV debate the mayor called our entire police force racist, while another candidate insisted Buttigieg fire the police chief,” said Fraternal Order of Police Pres. Harvey Mills, in a video. “Because this incident is now just another part of presidential politics to him, Mayor Buttigieg must do the right thing and recuse himself from any further decisions related to this matter.”

Instead, Buttigieg spent much of the day talking with some of the people of South Bend and politicians, talking about possible policy changes.

“We’re going to initiate a process, open to the public, where each of those policies in the coming weeks will be looked at and, if necessary, be revised in accordance with the best practices based on national expertise and community input and what the community thinks is important,” said Buttigieg.

He said he wants to put more resources into public safety, which may require a commitment from the city’s common council.

“We’re at a path. We can go one direction or another. If we go the right direction, we’re going to be making improvements within our policy, within our city, which is going to benefit residents, the police, the administration, everybody,” said Common Council Pres. Tim Scott, at a short news conference.

Buttigieg said he believes, despite the FOP’s criticism, that everyone lives in the shadow of systemic racism.

“When I’m saying everyone that works in policing is affected by this, just to be clear, everyone who works in elected office is affected by this too. Every mayor works in the shadow of systemic racism. Every resident lives in the shadow of systemic racism, people of color and people who are not. So this is not an attack on our police department. We will always support police officers who do the right thing,” said the mayor.

Buttigieg said he wants to fill a spot on the public safety board with someone from the community.