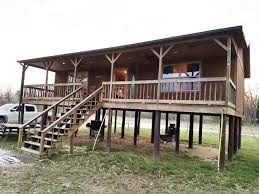 (SHOALS) – Cabin owners on West River Road in Shoals were informed they were in violation of Indiana law and told they had to leave their property.

Ted Oshier, 75, a Vietnam vet, recently retired from years of work at the post office. With part of his retirement, he purchased a cabin in Shoals.

Just months after moving in, he and his neighbors received a letter from the Indiana Department of Natural Resources. The DNR says the cabin owners are in violation of the Flood Control Act. This law was passed in the 1980s, well before any of the current cabin owners had purchased land.

Adam Greene, a Loogootee resident, is one of many who owns a cabin along the river. Some, such as himself, rent them out to others. Some just visit when the weather’s nice. A few live there full-time.

Greene received his first letter in February 2017 from the Indiana Department of Natural Resources, saying his property might be in violation of flood regulations.

The Flood Control Act (Indiana code 14-28-1) requires approval from the DNR to have a structure such as his cabin in a floodway, the letter read.

Although he bought the cabin in 2015, Greene said he was never told he needed approval from the DNR until the letter. He said about 20 people got similar letters from the county and/or the state that year. Then the residents heard nothing from officials.

Then a second letter arrived in April and homeowners were told they had 30 days to vacate the property. Greene hired an attorney.

“Recent historic floods have threatened the lives of Indiana residents and caused substantial damage to property at numerous locations within the state,” the letter reads. “Regulation of construction activities located in floodways is a matter of extreme importance.”

He says there is no compromising with DNR. He offering to raise the cabin 100 feet but they said no.

“My lawyer handled the appeal, but so far he’s kind of saying he doesn’t think he can do much just ‘cause it’s the law,” Greene said.

The cabin owners have also partnered with state Rep. Shane Lindauer, R-Jasper, and state Sen. Eric Bassler, R-Washington, who spoke with the DNR. But they had similar sentiments — the law is the law.

Cody Roush built a cabin near the river. She says officials with Hoosier Uplands inspected the septic and local conservation officers stopped by several times during the process. They never mentioned anything about violating any laws.

The letter says if cabin owners don’t comply they could face an initial $1,000 fine. That would be followed by a $500 fine daily.

Oshier says if he has to leave he will be homeless.