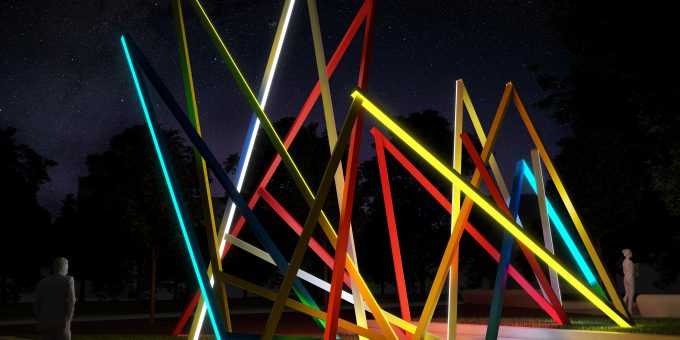 (BLOOMINGTON) – Internationally exhibiting artist Stefan Reiss has been selected from among five finalists to create new, site-specific artwork for the Trades District. Reiss’s design concept for his proposed artwork titled O.T. 987 was chosen by a selection review panel consisting of members of the community and the Bloomington Arts Commission (BAC) for its correspondence to the district’s culture of innovation.

The proposed site for the artwork is the 10th Street Gateway at the intersection of 10th and Madison Streets in the heart of the Trades District, the city’s new innovation and employment hub. Funding for the project comes from Bloomington’s Percent for the Arts Ordinance (Chapter 2.12.021 of Bloomington’s Municipal Code), which stipulates that at least one percent of the cost of construction for capital projects eligible for public art be used for public art at that or another site.

“The quantity and quality of the proposals received for this public art commission speak to Bloomington’s ever-growing identity as a cultural capital,” said Mayor John Hamilton.  “This striking work of art will further distinguish our new Trades District as a creative destination.”

O.T. 987 is a sculpture that activates its surroundings through the use of light.  The piece features square plexiglass tubes arranged in intersecting triangular forms which vary in height, into which LEDs are installed.  The lights are programmed in sequences that vary over time and provide interest at night as well as during the day.

Located just north of the downtown district on a site formerly occupied by the historic Showers Brothers Furniture Company, the Trades District has been designed as an innovation district — a new cultural and economic destination for the community. Reiss’s proposed design distinguished itself, in part, by expressing the future-focused mission of the site, while serving to restore the attention of passersby to their immediate surroundings.

The selection review panel selected five finalists to submit design concepts for a signature work of art for the Trades District.  Selected from over 70 applicants who responded to an international request for qualifications (RFQ) from within the state and as far away as Australia, the finalists included three regionally based artists/artist teams — Andrea Stanislav; the team of Jiangmei Wu, Brian McCutcheon and Lucas Brown; and Team Grand Barbican, consisting of Jennifer Riley, Dorian Bybee and Jeeyea Kim — American artist Ben Zamora, and the Berlin-based Reiss.  Reiss was chosen after a four-week public comment period during which the selection review panel collected over 350 comments about the five finalists.

“We are working hard to make our art selection process more inclusive,” said Sean Starowitz, Assistant Director for the Arts.  “We were greatly impressed by the level of enthusiasm and engagement Bloomingtonians showed regarding the proposals.”

“This sculpture is a significant addition that diversifies Bloomington’s public art collection,” said Nick Blandford, Chair of the BAC’s Public Art Planning Committee.  “Stefan’s work embodies themes rooted in the Trades District – echoing history, with an eye towards Bloomington’s future and our participation in the global community.”

The proposed artwork is expected to be complete in the next 12 to 18 months.