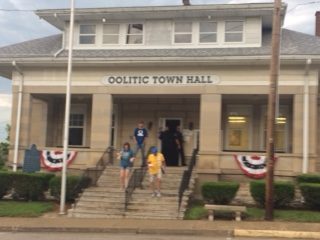 Bill Kendall allowed residents to bring videos of the damage from excessive stormwater and again they addressed the council with the issues they have been dealing with over the last several years.

Bill Kendall told the group that no matter what system the town had in place or will have in place it would not be able to handle the amount of rain that has hovered over them the last few weeks.

Joyce Nicolson stated she has lived with these issues for more than 43 years and the issue was here long before the recent storms.

According to Jim Jenkins, “This has been happening for years.” The area around Vista and Nikirk is a constant headache for residents. The town has three projects underway of which one has been completed and the other two will be addressed shortly.

Town Officials state residents must be willing to pay for upgrades and be a part of the survey’s that the Southern Indiana Development Corporation and Town Officials will be conducting shortly.

Although the number of people surveyed has been lowered, residents must be willing to participate in the survey. The survey asks the number of those in the household in addition to their income level which will be placed in a sealed envelope and kept confidential .

The last time the survey was completed some residents refused to take part, making it very difficult for the process. They did not receive any grant funds because the survey revealed the town did not meet the income level required to receive the grant.

“We were too wealthy” said Bill Kendall.

“This is costing my health, I am 73 years old, and I have dealt with this flooding my home for the 43 years I have lived here. We have made quick fixed put band-aids on the situation. But, at my age, I can no longer deal with it. I went to the doctor to deal with the stress this has caused,” one resident claimed while in tears addressing the council.

“If you want us to address your concerns, you must be willing to pay for it,” he added.

“Many opposed the 42 percent increase in water rates and opposed the stormwater fees when we passed them. But, our town is limited on funds. The money from the sale of the school went to three stormwater projects.” Kendall added.

Tim Acton told WBIW News that he would be willing to pay more in taxes to address some of these concerns.

“I came from Chicago and my taxes there was as much as a house payment here a month. We must be willing to pay more to address these needs. The town does not have a business to support the funding that is needed to get things rebuilt. I support more grants to get things accomplished,” Acton added.

Acton has lived in Oolitic for more than 20 years and states, “I think this current council has worked hard to address these issues. They really have done a good job.” Acton went on to say, “We need to start dealing with our roads and water issues.”

What is the next step for Oolitic? On Wednesday President Bill Kendall and Dirk Sears will meet with an engineer to start looking at photos, videos, and the long list of issues of flooding the town has been dealing with.

Only two council members can attend, because if more than the two attend it would be considered a town meeting and have to be advertised.

Once they receive the recommendations, town officials will meet with Southern Indiana Economic Development Corporation and put it into a grant request. And of course 80 names will be identified for town officials to interview and see if they meet the income level required for the grant.