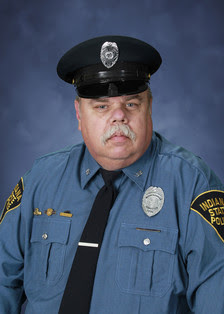 Robinson, a native of Fort Wayne, Indiana is a 1980 graduate of Elmhurst High School. Robinson began his career with the Indiana State Police on August 7, 1979 when he was appointed as the building custodian for the Fort Wayne Post. In 1985 Robinson trained and became a mechanic’s assistant where he conducted routine maintenance of the District’s fleet of patrol and administrative vehicles. In 1994, Robinson completed the training for and was reassigned to the Commercial Vehicle Enforcement Division as a Motor Carrier Inspector at the Fort Wayne Post, where he served for the duration of his nearly 40 years of service.

During his career, he has held certifications in the Motor Carrier Service Assistance Program (MCSAP), Hazardous Materials, Motor Coach, and he has also been involved in the training of new Inspectors at the District and the with the certifications for Troopers involved with MCSAP.

Joe and his wife Lori of 40 years plan to maintain their residence in Waynedale. They have an adult daughter, Rebecca, who resides in Ohio. Presently Joe has accepted a position with Parker’s Wrecker Service in Fort Wayne, where he will be employed as their Fleet Safety Coordinator. Robinson’s nearly 40 years of loyal and dedicated service to the Indiana State Police and to the citizens of Indiana is truly appreciated