(BEDFORD) – The planning of a celebration for the completion of the Stellar Project had begun and will occur in September.

According to Business and Community Director Marla Jones, the total cost of the Stellar Project was $21,467,094.70. Local contributions totaled $10,396,128.10.
Jones updated City Council members on the Stellar Project which is almost complete. She says a few minor things still need to be completed.
The project began in 2014, and the state is happy to see Bedford has met its goals and transformed downtown into a beautiful and vibrant area.
Milwaukee Depot 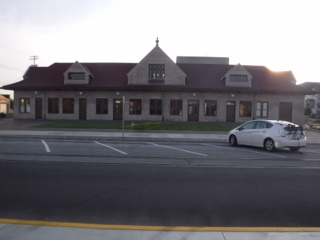 The Milwaukee Depot was moved on May 18, 2016 from its location between I and J Streets to downtown approximately four blocks south on the southwest corner of 14th and J streets. The limestone depot was built in 1899, and 3,700 square feet was rehabilitated. A ribbon-cutting ceremony and open house were held on May 18, 2017 to celebrate the accomplishment and opening of the Downtown Depot.
The City of Bedford leases the office in the depot to S.I.G.H.T.S. (Southern Indiana Geographical and History Trail System) and they host community events in the Downtown Depot.
A bronze historical marker has been purchased and will be installed at the depot. Elliot Stone Company purchased the limestone marker, Marlow Construction will do the concrete work, and Johnny Signs will fix it.
Currently, an application for National Register of Historic Places is in the technical review stage.
The completion of these items will fulfill the Memorandum of Agreement between SHPO and the City of Bedford.
Depot Relocation and Rehabilitation:

Limestone Trail downtown Loop (Sidewalk Projects)
The establishment of an urban trail system was one of the top ranking priorities identified in the City of Bedford’s Comprehensive Plan and Downtown Revitalization Plan.
The Limestone Trail System is a comprehensive trail plan developed for the City of Bedford by Indiana University students.
A portion of Limestone Trail System will be developed connecting the Milwaukee Road Trail to the downtown square utilizing the popular L Street/Lincoln Avenue corridor. The connector trail is being constructed over city right of ways.
The connector started work in March of 2018; all contract work is now complete. Material is between 90-95 percent complete. Officials are currently working on an application for historic northside neighborhood impacted by the project.
The projected completed date was June 14, 2019, and was completed six months early.
Limestone Trail Downtown Loop Project:

Downtown Street Project
The City of Bedford undertook a streetscape enhancement project to encourage walkability, safety for pedestrians, providing clean, attractive, and inviting places to shop, sit and watch activity, and promote interaction. The project encompassed all four sides of the square. The streetscape improvements are on the City’s right-of-way without property acquisition.
The first day of work began on March 11, 2017. Construction operations continue on 15th and 16th streets. All originally contracted items have been completed, both on the Downtown Streetscape, and J Street Trail projects, with the exception of remaining change order items.
The final project item is the replacement of cracked concrete. Weddle Brothers have removed damaged/cracked sidewalk sections on 15th and 16th streets and are preparing to replace the concrete. Once the concrete has been poured and scoured, caulking will be added to complete the areas. The project will be substantial competition after the concrete repair and ready for pre-final inspection.
Marla Jones noted that problems with the mix might have caused the cracks, or weather issues, most of the issues occurred close to the buildings on the north side of 15th Street. Most of the repairs have been made with them removing the concrete and cut out the bad concrete.
Downtown Streetscape Project: 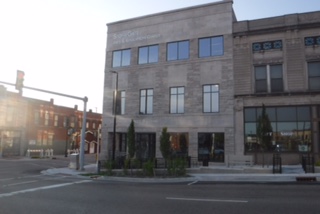 The City of Bedford replaced the former JC Penney building at the corner of 15th and J streets with a prominent three-story limestone-clad building. The StoneGate Arts & Education Center project established a major educational and performing arts facility in downtown Bedford. The center is a state of the art building for education, workforce development, professional training, and degree work as well as serves as an attractive community recruiting tool. The City of Bedford will continue to expand collaborative partnerships with Oakland City University, Ivy Tech Community College, Vincennes University, Radius Indiana, West Gate Academy, and North Lawrence Career Center.
Project Loan Closing was August 14, 2017. Construction began on August 30, 2017, and project partners held weekly program meetings. The United States Department of Agriculture substantial completion was September 26, 2018. Final Community Development and Block Grants funds were drawn down in October of 2018. The ribbon cutting was held on November 28, 2018. The event was well attended by the project partners of the Office of Community Rural Affairs, United States Department of Agriculture, Matthau Architects, Patterson-Horth, Stonegate staff, and community members.
The StoneGate Arts and Education Center Shawna M. Girgis building is complete and fully operational.
Community events began in December of 2018, and Spring Semester classes started in January of 2019. All CDBG expended and monitored exceeding the required match. Marla Jones stated that a storm damaged a pipe on the heating and cooling units and had to be repaired.
During the day the classes are usually smaller, with more classes occurring in the evening. Any group who wants to utilize the facility need to put in requests almost a month in advance. And most of the universities use it for smaller courses that generally last only five weeks. The final walk-through will occur in July, and the painting is not quite halfway
completed yet.
StoneGates Center: 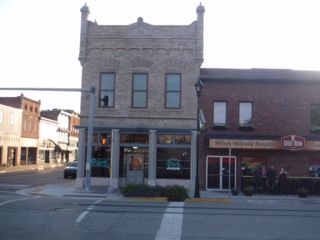 City officials implemented a downtown facade improvement program. The work included structural improvements to buildings, storefront repairs, window replacements, masonry tuck-pointing, and new awnings. All of the work was done following U.S. Secretary of the Interior Historic Standards and followed the design guidelines for facade rehabilitation and restoration.
Funding for Indiana Housing & Community Development Authority business development program was approved to be utilized for facades.
The City received bids for the project on December 18, 2017. In January 2018, building owners met with the Stellar Team regarding submittals required to award the contract. The owner of the buildings provided a 20 percent match to participate in the facade project. Escrow agreements and copies of building insurance documentation were provided to the City of Bedford on February 12, 2018. The contract was awarded to the lowest bidder on February 16, 2018. A pre-construction meeting was held the week of February 19, 2018, with each participating building owner.
The project renovations are all complete. Final facade signage has been installed at 1545 J Street, which was the Atrium Dental Office. The project will be completed Thursday. The final deadline for this facade was May 16, 2019.
Facade Project: 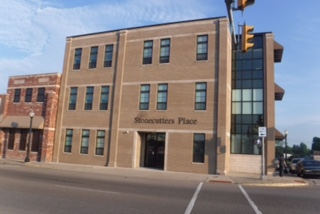 Hoosier Uplands partnered with the City of Bedford to develop Stonecutters Place Senior Housing from the former Carriage House Furniture/Travelers Radio Manufacturing building. Stonecutters are affordable, 30 apartment senior housing community in downtown Bedford. Construction work on Stonecutters Place Senior Apartments d was completed in November of 2015. The ribbon-cutting ceremony and grand opening were held in November 2015.
The final budget was $212,102 lower than the projected budget. Hoosier Uplands funds budgeted via a loan to the project and deferred developer fee was not required for the project. Contingency expenditures were less than initially projected because of fewer occurrences of unforeseeable construction expenses.
The building has only one vacancy at this time, and a background check is underway. There is a waiting list of more than 100 people.
Stonecutters Apartments: 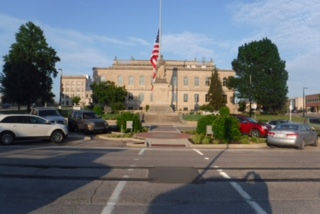 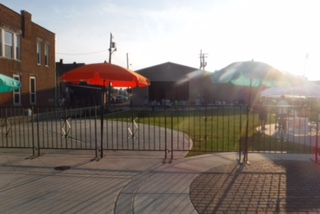 The City of Bedford worked with the Bedford Revitalization Inc. to provide a place for all walks of life to come together downtown.
Since the Stellar project award in 2013, the City of Bedford purchased the pole building and property west of Harp Commons. The addition of the property has allowed the expansion of the proposed gathering place to include performing arts stage and create a larger venue for community celebrations in the heart of the downtown. Through the Stellar Community Program, Harp Commons and Maiden Lane have become safer, more attractive, and easier to transverse.
The development of Harp Commons has added green space downtown as well as a place to celebrate. Tri-County Builders completed work on June 30, 2016.
BRI and City of Bedford are hosting a Summer Stage Concert Series again this year. A slight variation from last year, concerts will take place on the first Friday of the month. Shows will feature a local group at 6 p.m. followed by a regional band from 8 p.m. until 10 p.m.
The City of Bedford has been working with the BRI to identify additional needs and outdoor space.
Harp Commons Project:

Beginning Year Balance: $49,843.00, and the current balance remains the same.
Murals
The City of Bedford will continue to add art in public places to add color, interest, and enhance the downtown. Goals are to engage and promote the local community, beautify downtown buildings in high visibility locations, and celebrate Bedford’s creative culture and unique character. 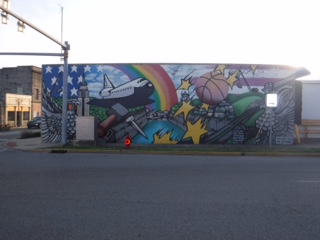 In May, native Mark Mckenzie painted a colorful Bedford/Lawrence County- themed mural on the east side of the Times-Mail building at the corner of 16th and H streets.
The city is working with building owners Tim Thompson and Pam Voorhies to add a mural to the south side of Harp Commons. The Mural will be approximately 11 feet tall and 60 feet wide. The building owner and City have selected the mural’s theme, and it will celebrate downtown Bedford.
The city advertised for design ideas and Bedford resident Amy Summers mural design was chosen from the entries received. The City of Bedford is working with HD Graphix in Orleans, Indiana to produce the mural. It will be installed in the Spring of 2019.
Marla Jones stated right now they are still in some discussions of what the mural will finally come out to be. 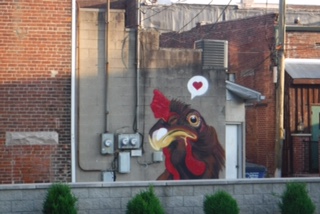 Another mural, a rooster, was painted by Mitchell Austin on Tim Thompson’s building.