(INDIANAPOLIS) – Ellsworth Kelly forged a distinctive style of abstraction over his seven decades as an artist, and he was commemorated Friday with 10 U.S. Postal Service stamps highlighting his work.

The Ellsworth Kelly Forever stamps were dedicated at the Ellsworth Kelly Studio in Spencertown, NY. News about the stamps is being shared on social media using the hashtags #EllsworthKelly and #EllsworthKellyStamps.
“Ellsworth Kelly honed his artistic voice as a soldier during World War II when he created camouflage patterns and designed posters for the U.S. government,” said USPS Marketing Vice President Steve Monteith, who served as the dedicating official. “Today we celebrate the American master of abstract painting with these dynamic stamps that truly capture the creative talent of Kelly and will be seen by millions as Forever stamps on cards and letters.”
Characterized by precise shapes rendered in bold, flat colors, Ellsworth Kelly’s art encompasses painting, sculpture and works on paper, drawing on careful observations of light and shadow, negative space, and line and form. In painting shapes — like a tennis court, a smokestack on a tugboat, or the roof of a barn — as flat planes of color, Kelly removed their dimensionality and turned reality into abstraction. He was also one of the first artists to create shaped canvases and to integrate art with modern architecture, taking great care in the decisions he made about the size of a painting, its boundaries, and its placement in relation to walls and floors.
Even late in his career, Kelly continued to refine his vision, constantly returning to his notebooks and earlier works to further develop ideas and explore new directions. Fittingly, his last work, an ambitious free-standing building titled Austin, seamlessly melds color, sculpture, and architecture into a single experience.
Kelly received the National Medal of Arts in 2013. Today his work is in the permanent collections of major museums in the U.S. and around the world.
Joining Monteith at the ceremony were Jack Shear, Ellsworth Kelly Foundation Director; Ian Berry, Dayton Director of the Frances Young Tang Teaching Museum and Art Gallery, Skidmore College; and Ian Alteveer, Associate Curator of Modern and Contemporary Art, Metropolitan Museum of Art. 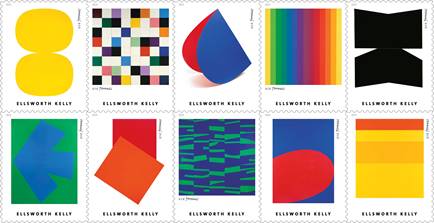 The 20 stamps on the pane feature 10 of Kelly’s artworks, each represented twice in the following order: top row, L to R: “Yellow White” (1961), “Colors for a Large Wall” (1951), “Blue Red Rocker” (1963), “Spectrum I” (1953), South Ferry, (1956); and second row, L to R: “Blue Green” (1962), “Orange Red Relief for Delphine Seyrig” (1990), “Meschers”, (1951), “Red Blue” (1964), and “Gaza” (1956). The selvage features a detail from “Blue Yellow Red III” (1971), as well as Kelly’s name and his birth and death years.
Ellsworth Kelly’s name appears at the bottom center of each stamp in bold black type. “USA” and “Forever” are printed alongside each artwork.
Derry Noyes served as art director and designer for this stamp sheet.
The Ellsworth Kelly stamps are being issued as Forever stamps, and will always be equal in value to the current First-Class Mail one-ounce price.
Postal Products
Many of this year’s other stamps may be viewed on Facebook, Instagram, or via Twitter. A video of the ceremony will be available on Facebook.com/usps.
Customers may purchase stamps and other philatelic products through the Postal Store at usps.com/shop, by calling 800-STAMP24 (800-782-6724), by mail through USA Philatelic, or at Post Office locations nationwide. Forever stamps will always be equal in value to the current First-Class Mail 1-ounce price.
Information on ordering first-day-of-issue postmarks and covers is found at usps.com/shop under “Collectors.”
The Postal Service receives no tax dollars for operating expenses and relies on the sale of postage, products, and services to fund its operations.