City of Bedford, Lawrence County Highway Department crews, Bedford Fire Department and area volunteer firefighters were out most of the night removing trees from roadways and assisting with down power lines.
Both Duke Energy and REMC crews were busy restoring power.
Dispatchers at both Bedford Police Department and the Lawrence County Sheriff’s Department were kept busy answering calls reporting storm-related damage.
At 10:22 p.m. a 911 call came into the Sheriff’s Department reporting a tree on top of two houses in the 1500 block of 22nd Street.
At 10:32 p.m. there was a report of a tree on top of a car on Q Street behind Papa’s Bar & Grill.
At 10:36 p.m. 911 call came into the Sheriff’s Department reporting two trees on the top of a home in the 1100 block of 25th Street 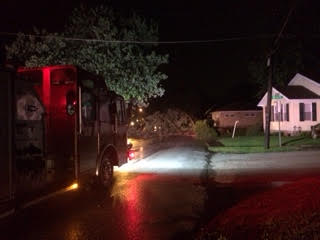 Tree down on Washington Avenue 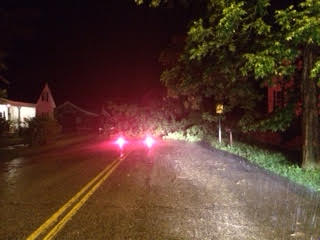 Tree down at 20th and I streets
Standing, high water and trees down could be a problem in some areas during your morning commute. 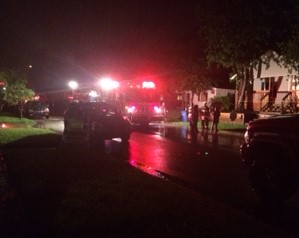 Tree down at 22nd and O streets
Weather forecasters say there will be a lull in activity mid-morning into the early afternoon before afternoon heating spurs new scattered showers and thunderstorms. Severe weather is not expected Thursday evening, and trends for rainfall to diminish will get underway quickly overnight. Friday will bring much-improved weather.
Farmers continue to struggle this spring.
A soggy spring has prevented much of the Indiana corn and soy planting to be placed on hold. Through May 29, a mere 22 percent of the corn crop is in the field, down from the same time last year when 94 percent was planted. Soybeans are even worse with only 11 percent plated versus the previous year when 85 percent was planted.