(BLOOMINGTON) – Through their hard work and dedication to public service, Trooper Zach Parker has been selected as the “2018 Trooper of the District” and Trooper Wyatt Phillips has received the “District DUI Award” for the Bloomington Post.

Parker and Phillips received their awards last week at the Indiana State Police Spring Awards Ceremony held at the Indiana Government Center in Indianapolis. The “Trooper of the District” Award is presented to the Trooper at each district who has achieved outstanding efforts in the areas of traffic and criminal enforcement, case and crash investigation, public information programs, and community service and who has exemplified the professionalism and integrity expected of an Indiana State Trooper.

Trooper Parker is a five year veteran of the Indiana State Police, and during 2018, his proactive efforts resulted in 897 traffic contacts, 108 criminal arrests, on 269 total charges, (76 of which were felonies), he arrested 12 OWI defendants and investigated 53 criminal cases. His traffic stops resulted in the seizing of approximately ¼ pound of methamphetamine and over 2 pounds of marijuana. He also recovered two stolen vehicles. Also, he generated several confidential informants for DES, which resulted in multiple drug-dealing arrests along with even higher quantities of methamphetamine and heroin seized.
Trooper Parker is also a member of the Bloomington District Aggressive Criminal Enforcement Section (A.C.E.S.). 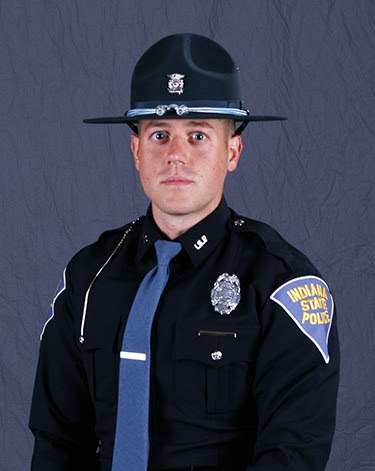 Presented to the top DUI enforcement Trooper in each District, the District DUI Award was earned by Trooper Wyatt Phillips. Phillips’ outstanding efforts in DUI enforcement resulted in the arrests of 25 DUI’s, 1,334 traffic contacts, 226 criminal arrests, (61 of which were felonies), he drew 50 cases and made several public appearances. Trooper Phillips is a two year veteran of the department and is originally from Waverly in Morgan County. A 2009 graduate of the Decatur Discovery Academy, Probationary Trooper Phillips served in the United States Army for six years before his graduation from the ISP Academy.
Lieutenant Paul Bucher, Commander of the Bloomington District, said “We are fortunate to have Trooper Zach Parker and Trooper Wyatt Phillips at the Bloomington District. Their hard work and dedication represent us very well. They are a tremendous asset to our community”.