On Friday, at approximately, 12:43 p.m., Master Trooper Barry Brown and other units from the Sellersburg Post All Crimes Policing (A.C.P.) squad were patrolling in downtown New Albany. While in the area of Anderson Park, Trooper Brown observed suspicious activity between a subject standing in the park and the driver of a gray Pontiac Trans Am.
Trooper Brown approached to investigate as the car began to pull away and the individual walked to a recreational vehicle parked on the property of 305 Cherry Street. Trooper Brown stopped the driver of the Trans Am, 34-year-old Nicholas E. Freiburger, of Depauw and as a result of his investigation, requested the assistance of other units including Trooper Zach Smith and his assigned K9, Riggs. 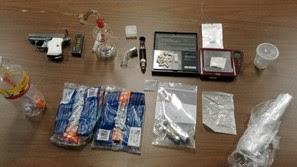