(TAYLORSVILLE) – A Columbus woman is facing charges after she allegedly refused to leave a business in Taylorsville.

Just before 6 p.m. Wednesday, Bartholomew County Sheriff’s deputies went to a convenience store at the intersection of North US 31 and West 650 in Taylorsville, after dispatch received a 911 hang up. 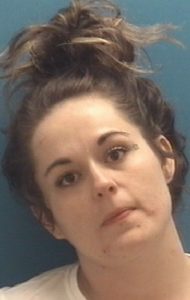 On arrival, employees told deputies they had asked 28-year-old Catina Caudill to leave the store multiple times but she refused.
Police found Caudill at the cashier’s counter. She then retreated behind the counter and a physical altercation began.
Police say Caudill continued to physically resist law enforcement as she was arrested.
She is facing preliminary charges of criminal trespass, resisting law enforcement, battery on a public official and disorderly conduct. She is being held in the Bartholomew County Jail on a $21,000 bond.