Firefighters from Marshall Township Volunteer Fire Department responded to the blaze at 12:25 a.m. 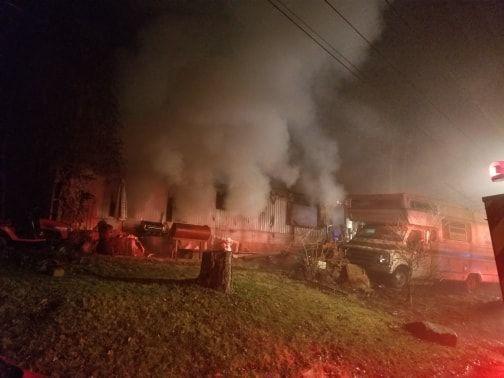 Photo provided by Marshall Township VFD Chief Chad Hayes
According to Marshall Township Volunteer Fire Department Chief Chad Hayes, one female resident suffered burns and was treated at the scene.
Tim Albertson and Roni Reynolds were renting the home from Jerry Shedd.
Shedd did not have insurance on the home.
When firefighters arrived at the scene smoke was billowing from the center of the home.
Firefighters acted quickly and were able to knock down the blaze, but the fire caused extensive damage to the mobile home.
Chief Hayes says he believes the fire started in the center of the home, but because of the extensive damage, it will be difficult to determine an exact cause.
Assisting at the scene were firefighters with Oolitic, Perry and Pleasant Run Volunteer Fire Departments, Pleasant Run Fire Department Auxiliary, and an IU Health Ambulance crew.