(BLOOMINGTON) – Last summer, Dr. Kirk Grand was hired to be the assistant sprint coach for both the men’s and women’s swimming teams. Along with his hiring to the swimming staff, Grand was also appointed the Associate Director of the Counsilman Center for the Science of Swimming. 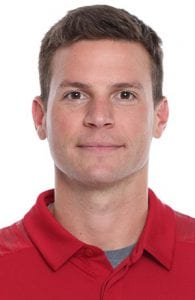 Kirk Grand
“We are excited to add Dr. Kirk Grand to our coaching staff,” said Indiana University swimming head coach Ray Looze. “With the hiring of Dr. Grand, we honor Dr. Counsilman’s legacy and reconnect ourselves to the academic pursuit of swimming excellence which the Counsilman Center for Swimming research has contributed to since its inception.”
Grand comes to Bloomington from Auburn University, where he was the primary coach for 19 All-American swimmers and multiple-time SEC and NCAA finalists and qualifiers. Grand also served as a USA Swimming National Team coach in 2018.
“I am elated by the opportunity to be a part of something special at Indiana,” Grand said. “I am humbled to join a program with not only a rich tradition of excellence, but also one that has, and continues to have, a tremendous impact on the sport of swimming.”
Grand graduated Cum Laude from Ohio State University in 2010 after being a member of the Miami (Ohio) University swim team from 2006-08. He earned his Master’s in Exercise Physiology, Human Performance from Indiana University in 2013. While earning his Ph.D. from Auburn, Grand specialized in psychophysiology and remained a research associate for the Counsilman Center for the Science of Swimming.
Grand has been published in multiple publications as well as the bookThe Science of Swimming Faster. He has also presented at the American Swim Coaches Association World Clinic on the limits to superior performance.
The Counsilman Center is named after legendary IU swimming coach James E. “Doc” Counsilman and honors his seminal work in developing the science of swimming. Throughout his career as coach and professor, Councilman stressed the importance of studying the scientific basis of human movement. The Counsilman Center aims to continue to provide the swimming community with valuable information as a means to advance the sport of competitive swimming.
Information, IU School of Public Health-Bloomington, http://blogs.iu.edu