(WASHINGTON) – After four terms in a 20-year period as Daviess County Sheriff, Jerry Harbstreit signed off the department’s radio system for the final time and his successor, Sheriff-Elect Gary Allison, officially took the reins and the radio moniker “14-1” as his term of office began at midnight on New Year’s Day in front of a large crowd of department employees, friends and family. 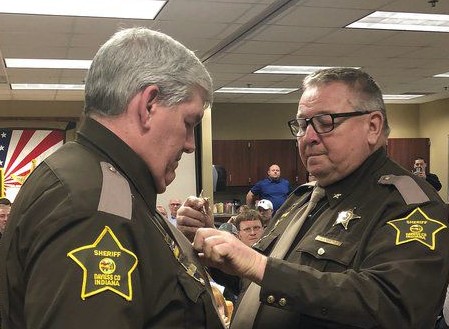 Harbstreit then pinned the sheriff’s badge and gold stars on the uniform shirt of Allison, himself a veteran of more than 30 years of service with the department who, like his predecessor, rose through the ranks to the department’s top job.
As is the tradition in law enforcement agencies, Harbstreit then signed off the radio for the last time, saying simply, “This is Daviess County 14-1, 10-42, good night and God bless.”
Then the emotional voices of deputies with the department came across in succession, thanking Harbstreit and his wife Sue, who is also retiring after many years as the jail matron, for their service and friendship over the years. In his final communication as chief deputy, Allison thanked Harbstreit for the “wisdom” he has imparted during his time as sheriff.