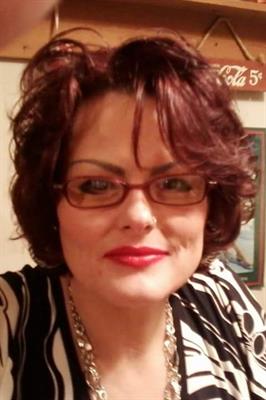 November 11, 1968 – May 29, 2018
Stacey Lynn (Sergent) Frye, 49, of Bedford, passed away on Tuesday, May 29, 2018 in Bloomington, IN.
Born November 11, 1968, in Washington, IN, she was the daughter of Jim and Doris (Hatfield) Sergent. She was a graduate of Mitchell High School with the class of 1988.
Survivors include her father, Jim Sergent and wife, Brenda, of Shoals; her mother, Doris Sergent, of Bedford; two brothers, Gary (Laci) Sergent and Mark Sergent; a sister, Cindy (Brian) Davis; step-brothers, Harry and Matthew; step-sisters, Amber and Destiny; her beloved canine kid, Manzana; two nephews, Zac (Hailey) Sergent and Jobe Sergent; a great nephew, Jaxon Sergent; a great niece, Reilynn Sergent.
She was preceded in death by her grandparents.
Cremation was chosen. A Celebration of Life will be conducted at 1 p.m. on Saturday, June 2nd at the Loogootee Lutheran Church. A memorial service will be conducted at a later date for family and friends.
Family and friends may express condolences at www.daycarter.com.