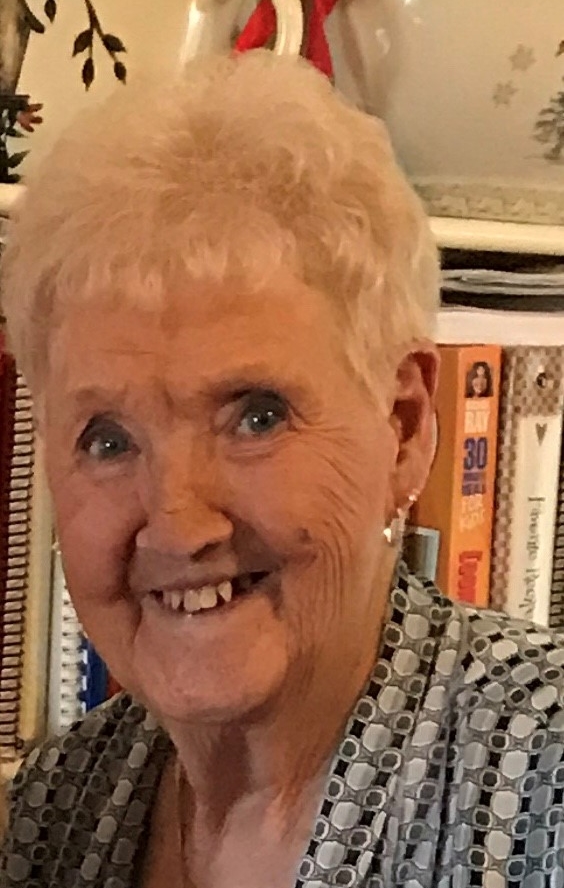 August 19, 1928 – December 12, 2017
Jean Foddrill, 89, of Bedford, died at 11 a.m. on Tuesday, December 12, 2017 at I.U. Health Hospice House.
Born August 19, 1928 in Lawrence Co., she was the daughter of Fred (Jum) and Ethel (Burford) Brown. She married Charles D. Foddrill on January 11, 1947 and he preceded her in death on September 6, 1984. She was a beautician for twenty years and had worked in Dr. Mount’s office for thirty years retiring when Dr. Mount retired. Jean was a member of the Leesville United Methodist Church.
She loved her grandkids and great-grandkids, attending every sporting event or activity she could. She loved working in the garden, cooking (her pancakes were famous), and she was an expert at canning anything from corn to green beans. She was always quick with a funny saying, and she loved to laugh. Anyone who knew her, knew her as “Gram” because she was everyone’s Gram.
Survivors include two daughters, Sherri Bulleit-Miller and husband, Roger, of Corydon, Denise Bair and husband, John, of Leesville; seven grandchildren, Tiffani Kurtz and husband, Chris, of Bedford, Kaloni Groudle and husband, Ryan, of Corydon, Tabatha Anderson, of Bedford, Jarrod Bulleit and wife, Amanda, of Corydon, Natasha Hall and husband, Josh, of Bedford, Tara Conner, of Bedford, Tyler Norman and wife, Sasha, of Valonia; great grandchildren, Lauren and Logan Murphy, Liana Groudle, Haley Chambers, William, Sophia and Benjamin Bulleit, Camryn and Cash Kurtz, Eden and Davin Anderson, Kailee Schneider, Nala and Indie Hall, Reace and Ruger Norman; a sister, JoAnne Wesner and husband, Jimmy, of Leesville; several nieces, nephews and cousins.
She was preceded in death by her parents, her husband, a daughter, Alana Norman, two great grandchildren, Carson and Campbell Kurtz; two sisters, Oleta Jean and Marie Wever; a brother, Roscoe Brown; son-in- law, Tom Bulleit.
Funeral services will be conducted at 10 a.m. on Friday, December 15th in the Elmwood Chapel of the Day & Carter Mortuary with Pastor George Browning officiating. Burial will follow in the Fairview Cemetery. Visitation will be from 3 p.m. to 8 p.m. on Thursday, December 14th at the Day & Carter Mortuary. The family asks that friends consider memorial contributions be made to I.U. Health Hospice House or Becky’s Place.
Family and friends may express condolences at www.daycarter.com.
Dorothy Ruth Workman – Mitchell
May 31, 1929 – December 12, 2017
Dorothy Ruth Workman, 88, passed away Tuesday, December 12, 2017, at her residence.
Born May 31, 1929, in Huron, she was the daughter of Fred and Osie Pearl (Hopper) Mundy. She married James Hubert Workman November 16, 1946. Dorothy was a homemaker, a member of the Mitchell Church of Christ, and enjoyed puzzles.
Survivors include her husband, James Workman of Mitchell; children, Marilyn (James Harkness) Workman of Mitchell, Mike Workman of Mitchell, Mark Workman of Mitchell, Myra (Darren) Smith of Bedford; 6 grandchildren; 14 great grandchildren; sister, Maxine Pridemore of Mitchell
Her parents and siblings, Virginia Bundy, Frances Bosell, Thelma Mason, Herschel Mundy, and two in infancy, preceded her in death.
Funeral service will be at 1 p.m. Saturday, December 16, in the Memorial Chapel of Chastain Funeral Home & Cremation Center with Brother Brian Bolton officiating. Burial will be in Mitchell Cemetery. Friends may call from 11 a.m. until the service on Saturday at the funeral home.
Condolences may be sent to the family at www.chastainfueralhome.com