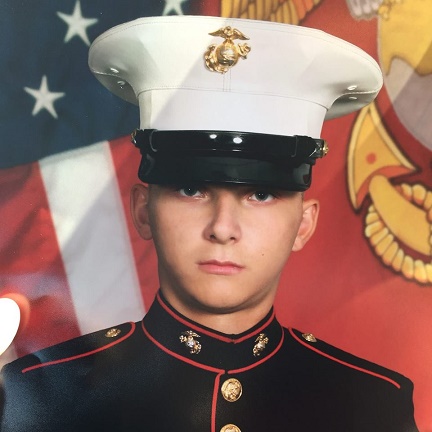 October 16, 1995 – November 2, 2017
LCPL Brady Scott Morrow “Craig”, age 22, was called home Thursday November 2, 2017 at 1:19 p.m. at
New Hanover Regional Medical Center in Wilmington, N.C.
He was born Monday Oct 16th, 1995 to Katrina Elaine (Tipton) Craig “Madre” and Brandon Eugene Morrow. He was raised from the age of 10 by his dad, “padre” Daniel Omer Craig.
Brady was a 2014 graduate of Mitchell High School. He dreamed of joining the military at the young age of 4. Those dreams came true when he graduated from boot camp on November 26, 2014 and earned the title United States Marine. Brady was a combat engineer at Camp Lejeune, NC and was assigned to the 8th Engineer Support Battalion, Bridge Company. He was a MKIIIBEB Operator that was skilled in knowledge involving IRB and MGB development. He was one of the most senior combat engineers in his company and highly proficient at his job.
Brady married the love of his life and best friend, Margaret “Maggie” Liane (Moore) Morrow, on May 23, 2015. He was a hero to his family and friends and served his country with honor, courage and commitment. Brady had a generous heart, kind soul and fun nature. He loved to make others laugh and knew how to turn the day to day grind into a moment of spontaneous laughter with one of his jokes or voice impressions. He made a difference and a lasting impact on everyone who knew him. His final sacrifice was to give the hope of continued life to others by being an organ donor.
Brady’s interests were in American history, video gaming and building things. He loved to tear things apart and build them back up just to see how they worked. He was a hard worker and would lend a hand when needed. Spending time with his siblings, his dad Daniel, Uncle Cody and Aunt Crystal were some of his greatest enjoyments. He would video game for hours with his brothers Blaine and Kennedy, as well as his devil dog brothers. Brady and his sister Kearstan enjoyed the quirkiness and unique relationship that only a pair of close lifelong siblings can. There was no fun trouble unfounded by him and his Marine brothers.
He is survived by his wife Maggie of Jacksonville, NC; parents, Katrina “Kat” and Daniel Craig of Mitchell and Brandon Morrow of Crawfordsville; a sister, Kearstan Brock and husband, Landon of Williams; a sister, Sarah Craig of Mitchell; a brother, Blaine Craig of Bedford; a brother, Kennedy Morrow of Bedford; and sisters, Emily and Bree Morrow, both of Jasper; a grandfather, Lester Tipton Sr of Bedford and “Nana” Susie Nicholson; a great grandmother, Janet “Davis” Glasgow of Springville; grandparents, Donna and Dexter Morrow of Oolitic; grandparents, Mark and Sherry Kopsho of Bedford; grandparents, Gary and Susan Craig of Bedford; great grandfather, Clarence Hall of Bedford; grandparents Frank and Brenda Poore of Bedford; great grandmother, Chloe Morrow of Bedford; father-in- law and mother-in- law, Tina “Arthur” Moore and Charles Moore Jr of Springville; sister-in- laws, Brandi Scott, Virginia "Ginnie", and Lydia Moore of West Baden and Springville respectively; as well as several aunts, uncles, cousins, four nephews, one niece, and many devil dog brothers.
He was preceded in death by a; grandmother, Kathy Elaine "McLaughlin" Tipton; uncle, Lester “jarhead” Tipton Jr; great grandpa, Perry Glasgow; great grandpa, Kenneth McLaughlin; great grandma, Emily “Fields” Tipton; great grandpa, Douglas Tipton; great grandpa, Eulas Morrow; and several other
loved ones.
Brady will be greatly missed and our memories with him will be forever cherished. Semper Fi our Marine, Til’ Valhalla.
Funeral services will be conducted at 2 p.m. on Sunday, November 12th in the Elmwood Chapel of the Day & Carter Mortuary with Pastor Brent O’Neal officiating. Visitation will be from Noon until 6 p.m. on Saturday, November 11th at the Day & Carter Mortuary.
Family and friends may express condolences at www.daycarter.com.
Eric Marshall Gootee – Bedford 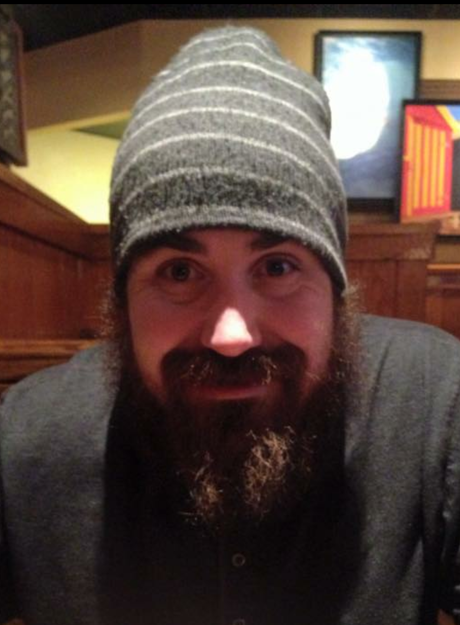 February 28, 1984 – November 6, 2017
Eric Marshall Gootee, 33, of Bedford, passed away on Monday, November 6, 2017 following a trucking accident.
Born February 28, 1984, in Bedford, he was the son of Carl and Judy (Abel) Gootee. He was a member of St. Vincent de Paul Catholic Church. He was a graduate of Bedford North Lawrence High School class of 2002 and had attended Indiana University. Eric worked as a truck driver for Hawkins-Bailey Warehouse. He had also worked at Rusty’s West End.
Surviving are his wife, Bethany Godsey-Gootee, of Bedford; two sons, Wilder and River Gootee, of Bedford; mom and dad, Carl and Judy Gootee, of Bedford; brother, Scott (Vanessa) Gootee, of Gulf Breeze, FL; one sister, Emily (Brian) Eagan, of Bedford; mother-in-law and father-in-law, Ray Godsey Jr. and Cathy Godsey, of Bedford; brother-in-law, Levi (Amber) Godsey; nieces and nephews, Dillon, Katlyn, and Ashlyn Eagan, Marissa and Amanda Gootee, Bracie, Brandt, and Adacyn Godsey; Eric’s dogs, Jerry Garcia and Stella Blue.
He was preceded in death by his maternal grandparents, Marshall and Mary Abel, and paternal grandparents, Oscar and Marie Gootee.
Eric was a very loving, hardworking man who was always there for his family and friends. He enjoyed the outdoors, listening to his record collection and most important of all spending time with his boys. He was hands down the best daddy there ever was. Eric will be greatly missed by all his family and friends.
Mass of Christian Burial will be at 10 a.m. on Friday, November 10, 2017 at St. Vincent de Paul Catholic Church with Father Benjamin Syberg and Deacon Dave Reising officiating. Burial will follow in Covey Cemetery.
Visitation will be from 4 p.m. until 8 p.m., Thursday at the Ferguson-Lee Chapel of Thorne-George Family Funeral Homes. Rosary will be prayed at 7:30 p.m. on Thursday.
In lieu of flowers memorial contributions may be made to Bethany Godsey-Gootee to establish a trust for their two boys.