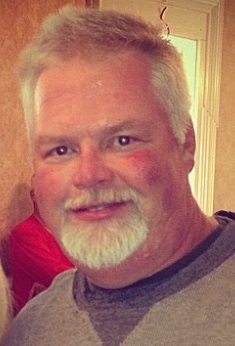 Gregory F. Rollins, 50, of Bedford, died Friday, January 16, 2015 at I.U. Health Bloomington Hospital.
Born April 5, 1964 in Bedford, he was the son of Norman Rollins and Shirley (Stevens) Hedrick. He married Debby Kinser on April 16, 1987 and she survives. He was self-employed and the owner of Greg Rollins Contracting. He was of the Protestant faith. Greg enjoyed fast cars, music (especially Elvis Presley) and golf. He loved Big Bang Theory, Trivia and the History Channel. He was a pilot and an excellent craftsman.
Survivors include his wife, Debby, of Bedford; a daughter, Kayla Jo Rollins, of Bedford; two sons, Robbie Davis and girlfriend, Bethany Bailey, Jimmy Davis and wife, Mandy; his parents, Norman Rollins and wife, Kathie and Shirley Hedrick; three grandchildren, Austin, Alexis and Abby Davis; a sister, Kim Raines and husband, Steve; a step-brother, Garrett Tomak and wife, Tracy; a step-sister, Lisa Robertson and husband, Jeff; a brother-in-law, Steve Kinser and wife, Carol; nieces and nephews, Jessica Potter and husband, Mike, Whitney Carroll and husband, Nick, Amanda Goodman and husband, Nick and Adam Kinser; his mother-in-law, Wilma Charles; his father-in-law, Herman Kinser and wife, Bonnie; his best friends, Carey Deckard and wife, Janelle and their children, Madelyn and Meredith, David Holmes and wife, Crystal, Ryan Sullivan and wife, Julie and their daughter, Rory, his daughter’s best friends, Hope Sowders and Samantha Storms who he thought of as his other two daughters, many other close friends and several cousins.
He was preceded in death by his grandparents, Roy and Beulah Rollins, Roy and Ruth Stevens, a brother, Jeffrey Landon Rollins (in infancy); his step-father-in-law, Buck Charles; a nephew, Brett Kinser; a great-nephew, Noah David Potter; two uncles, one aunt and several cousins.
Funeral services will be conducted at 10:00 am on Monday, January 19th in the Elmwood Chapel of the Day & Carter Mortuary with Pastor Jeff Hudelson officiating. Burial will follow in Hilltop Cemetery in Avoca. Visitation will be from 12:00 noon to 6:00 pm on Sunday, January 18th and 9:00 am until the hour of service on Monday, January 19th at the Day & Carter Mortuary.
The family asks that friends consider memorial contributions be made to the Boys and Girls Club of Bedford.
Family and friends are invited to express condolences at www.daycarter.com.
Online condolences may be sent to the family at www.fergusonlee.com.